As we adjust to a life that requires us to spend more time than usual with our significant others, some are finding issues that need to be addressed. One person wrote in to Reddit with a conundrum: their partner seems to turn into an infant when he is gaming with friends, and the OP wants some space in the form of a temporary relocation—on his part. 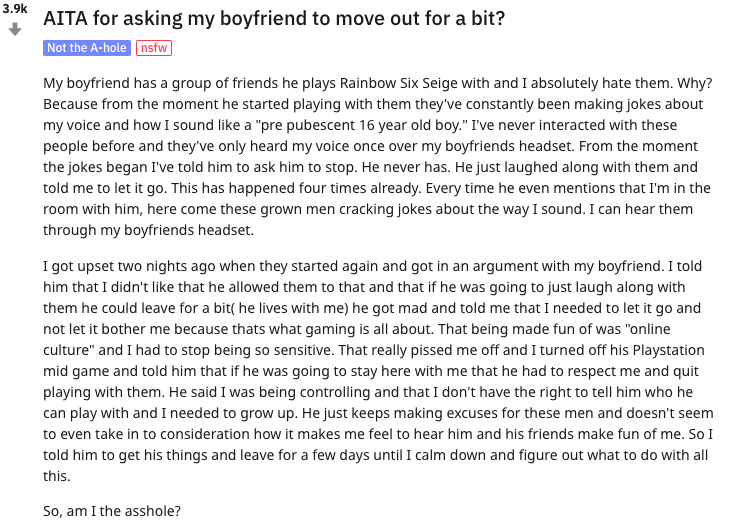 “My boyfriend has a group of friends he plays Rainbow Six Siege with and I absolutely hate them. Why? Because from the moment he started playing with them they’ve constantly been making jokes about my voice and how I sound like a ‘pre pubescent 16 year old boy,'” the OP writes.

“From the moment the jokes began I’ve told him to ask him to stop. He never has. He just laughed along with them and told me to let it go. This has happened four times already,” they explain. “Every time he even mentions that I’m in the room with him, here come these grown men cracking jokes about the way I sound. I can hear them through my boyfriend’s headset.”

So, the OP decided to express her displeasure at the situation, but she was dismissed with that wonderful phrase: “you’re too sensitive.”

“I told him that I didn’t like that he allowed them to that and that if he was going to just laugh along with them he could leave for a bit( he lives with me) he got mad and told me that I needed to let it go and not let it bother me because thats what gaming is all about. That being made fun of was “online culture” and I had to stop being so sensitive.”

To be fair, one should be participating in the “online culture” to be made fun of, not just existing in the background trying to cook or read or do whatever.

“That really pissed me off and I turned off his Playstation mid game and told him that if he was going to stay here with me that he had to respect me and quit playing with them,” the OP continued. “He said I was being controlling and that I don’t have the right to tell him who he can play with and I needed to grow up.”

Oh, controlling! Do go on.

“He just keeps making excuses for these men and doesn’t seem to even take in to consideration how it makes me feel to hear him and his friends make fun of me. So I told him to get his things and leave for a few days until I calm down and figure out what to do with all this.”

The OP was worried they might be an asshole about this entire situation, but Redditors had nothing but disdain for this callous boyfriend. Oh, and apparently he lives at the OP’s house rent-free.

“Your partner doesn’t act like a real partner. He downplays your feelings, doesn’t care that his friends are making you feel bad and disrespected and doesn’t have your back. Tell him not to come back,” said user SadderOlderWiser. “You are not being too sensitive or overreacting- he’s showing you who he is, and he’s not a good BF. Believe him and value yourself enough not to put up with BS.”

“Your SO should be in your corner. They shouldn’t actively do something that they know hurts your feelings, especially after you’ve asked them to stop. Would you accept this kind of behavior from your best friend? If not, then why does this dude get a free pass,” observed crocodile_deathspear.

A gamer stepped in and had some insider advice.

“He doesn’t respect you at all and sounds very immature. I’ve been a gamer (and a female one at that) for a long time. The ‘culture’ he’s talking about is very prevalent in the gamer world. Which is why I don’t do a lot of online gaming with people me or my friends don’t really know because getting harrassed by douchebags like these guys is common,” she said.

“He’s TA and is allowing his friends to be a**holes to you because it makes him look cool and fit in. If he really cared about you he would have shut it down the first time. Him allowing it to continue just shows he’s more concerned his cool gamer image with his friends than his girlfriend.”

Gaming culture isn’t all about making fun of each other and bullying folks who aren’t even participating in the game. From what the Redditors are observing, it just seems like the OP’s boyfriend is immature and doesn’t really care about his partner’s feelings. So, let’s kick this butt to the curb.