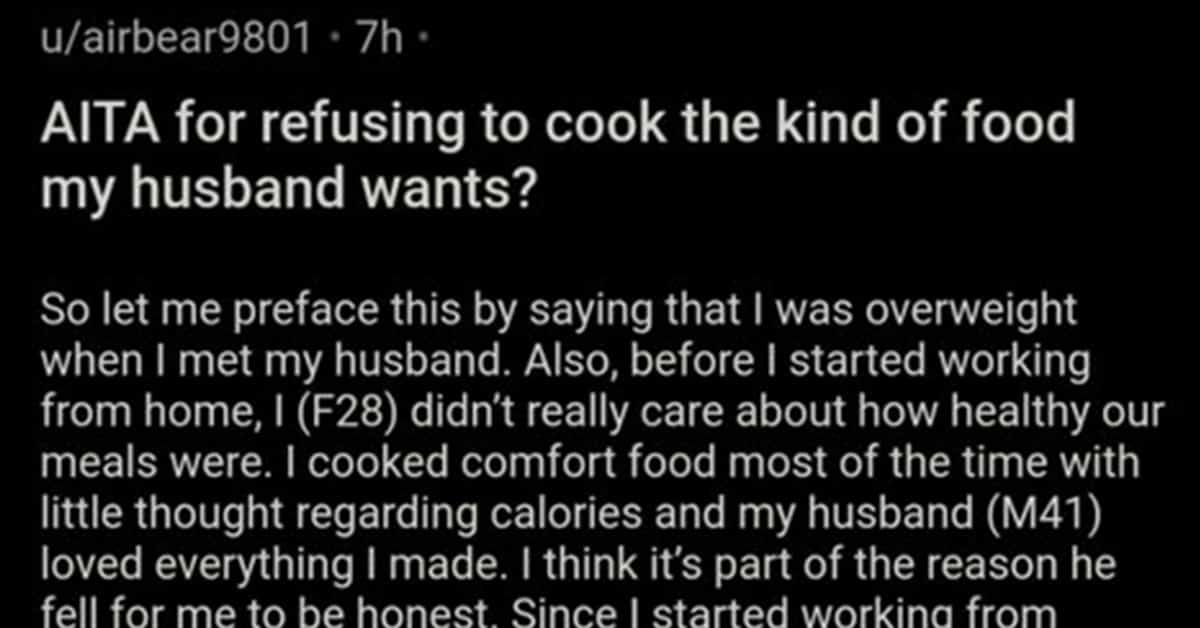 On the subreddit r/AmITheA**hole, it’s sometimes hard to tell who the problem in the story really is. More often, it’s extremely clear to everyone except the person posting. Right now, everyone is trying to tell Redditor u/airbear9801 that she is not the problem after she shared her issue at home.

The 28-year-old woman said she and her 41-year-old husband met at a time when she was overweight and cooking up a storm. She says she thinks part of the reason he fell for her was her delicious fatty cooking. But since she’s started working from home, she says she’s had the time to exercise and has started cooking healthier meals.

My family has a history of high blood pressure and it hit home for me just recently that it’s time to get in shape. My husband was supportive at first but as I’ve started to really lose weight he’s become less so. He’s always bringing home junk food, which would be fine if he wanted it just for himself, but he tries to pressure me into eating it as well.

She adds that he’s a mailman which involves a lot of walking, so he’s in better shape than her. He is also still eating a whole lot of her healthier food every night, but he complains about it. He also can’t cook and expects her to do the shopping and cooking:

When I say healthier choices I don’t mean tofu and kale, I mean that I’ve started cooking our favorite foods but with healthier alternatives, like using 1% milk instead of heavy cream and adding veggies. 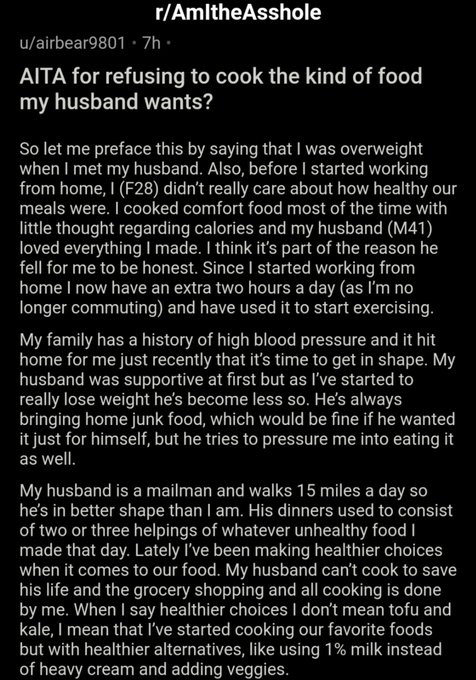 Since making these changes, she says that he has started trying even harder to get her to eat junk when he comes home. She’s afraid to tell him when she reaches a new goal because he acts like a crank about it:

It all came to a head last night when I made a casserole and added broccoli and used a lighter sauce. He flipped out and said I’m trying to push my “get better looking” agenda off on him even though my efforts to get in shape have nothing to do with how I look. He then accused me of being sick of him and using my workouts as an excuse to get away from him, which is completely untrue. I enjoy our time together and my workouts right now are only about 40 minutes because it’s all I can manage so I’m not leaving him alone that long.

He then said that he would drop it if I would go back to cooking and eating the way I used to. I told him that he was more than welcome to cook the way he wanted but he refused and left in a huff.

She says she called her sister-in-law to get some perspective, but her husband’s sister sided with him because he needs “fuel” to deliver the mail.

…Even though the food I’m making now is more nutrient dense than it was before and that just because cooking was one of my tasks in the relationship didn’t mean I should be the only one with any say in how things are made. 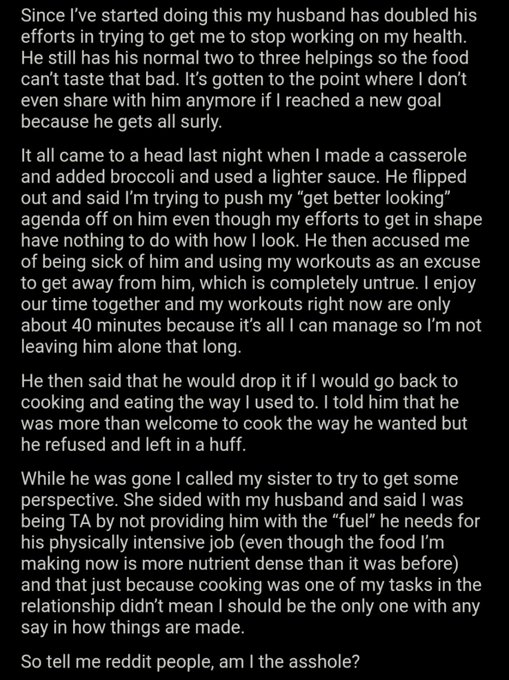 She wants to know if she’s the one being unreasonable here. People told her that she definitely wasn’t and if he has a problem with the food, he can learn how to cook! 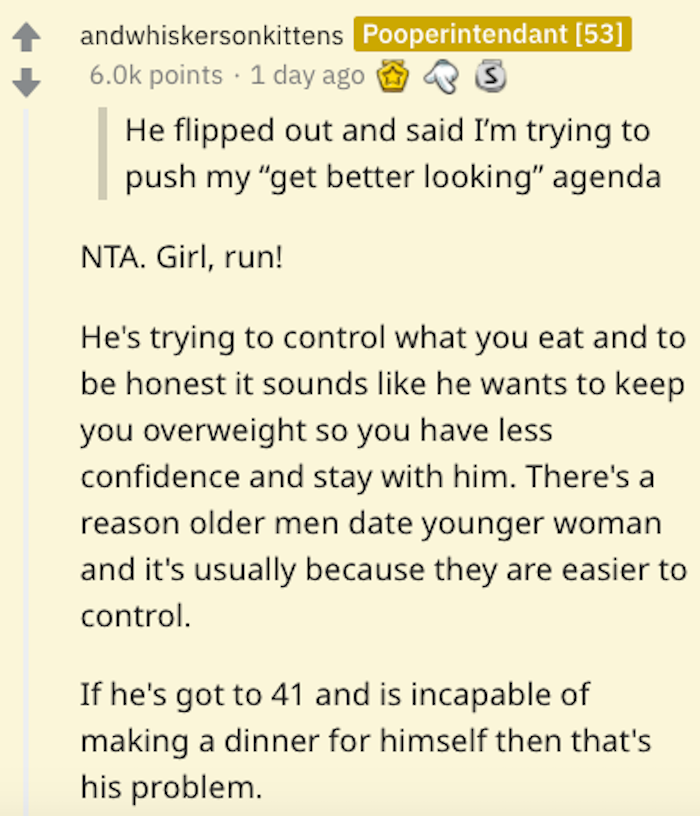 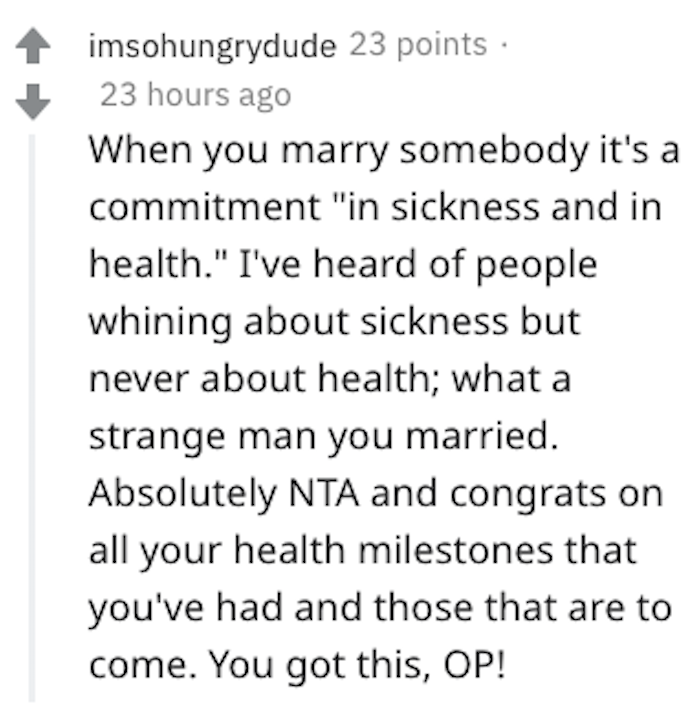 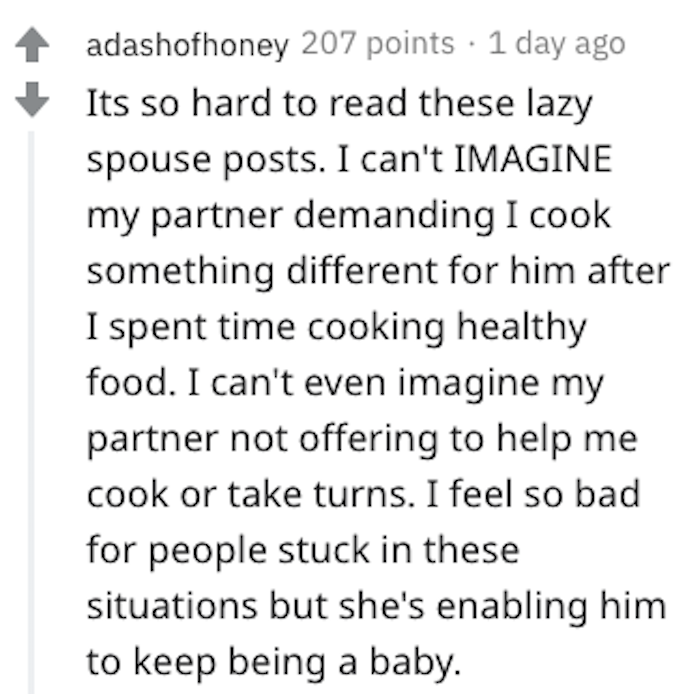 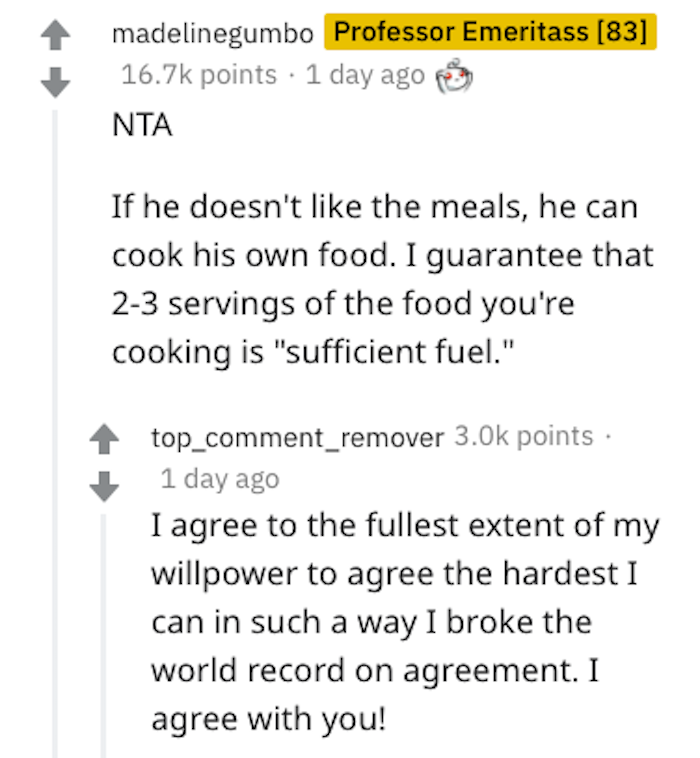 What’s strange in the comments is how many people said that this is a common dynamic. For some reason, some people want to stop folks they supposedly love from getting shape: 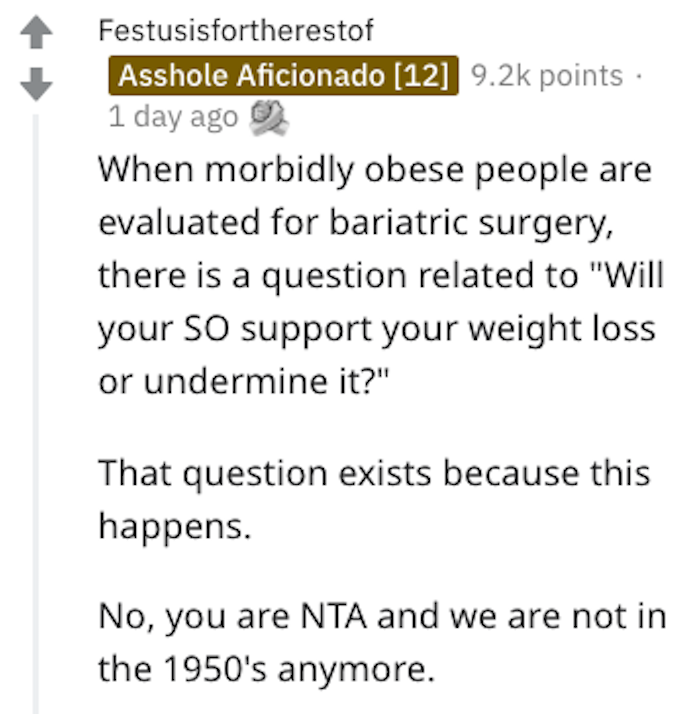 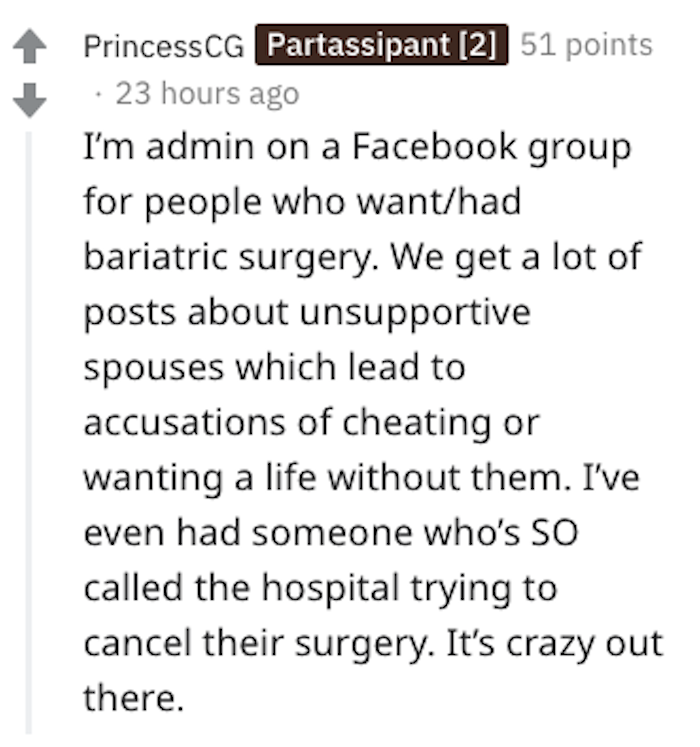 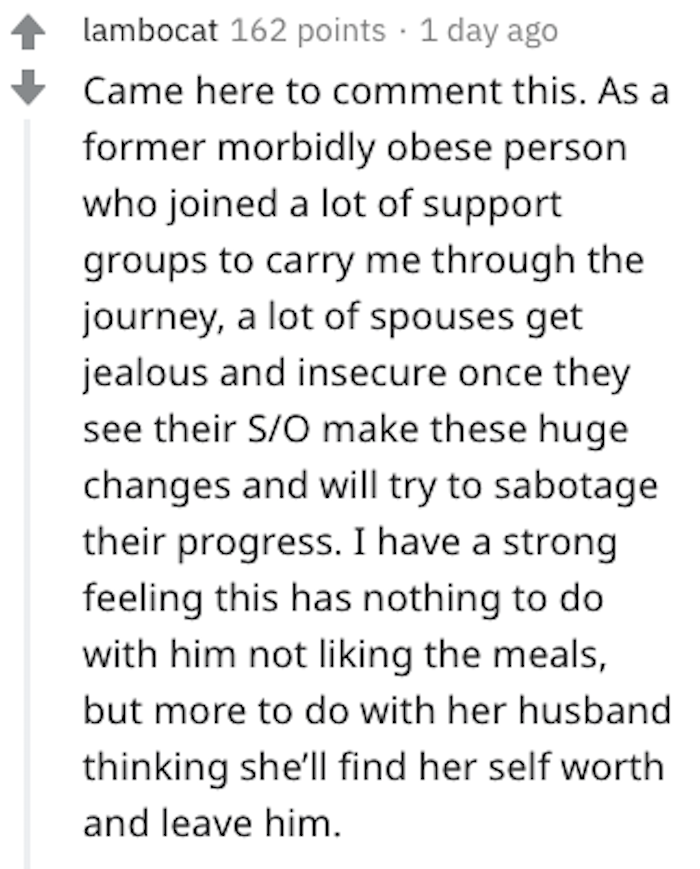 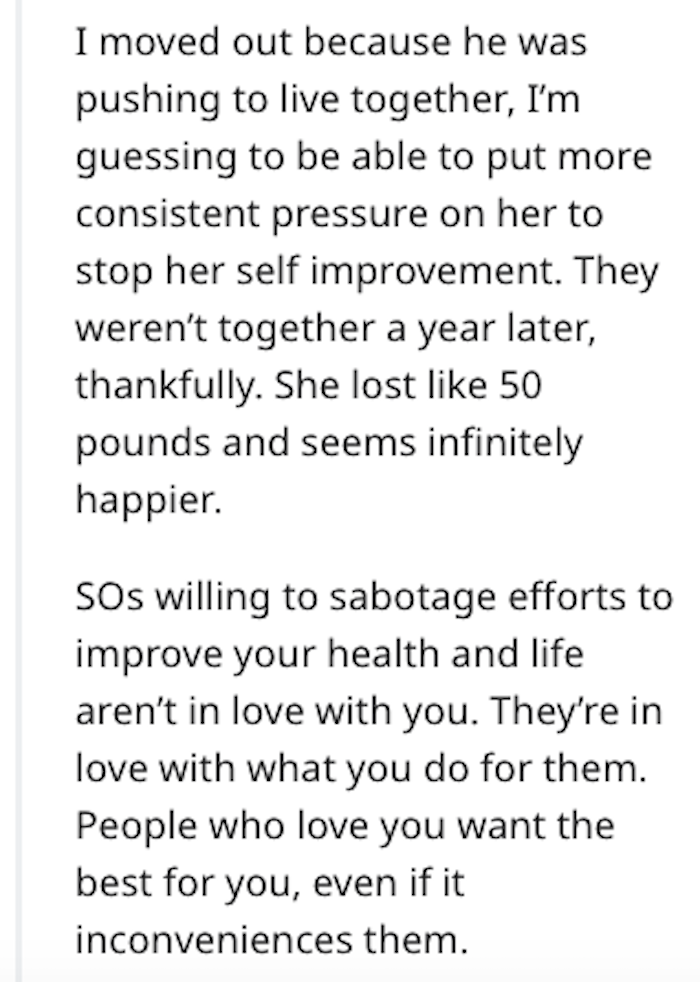 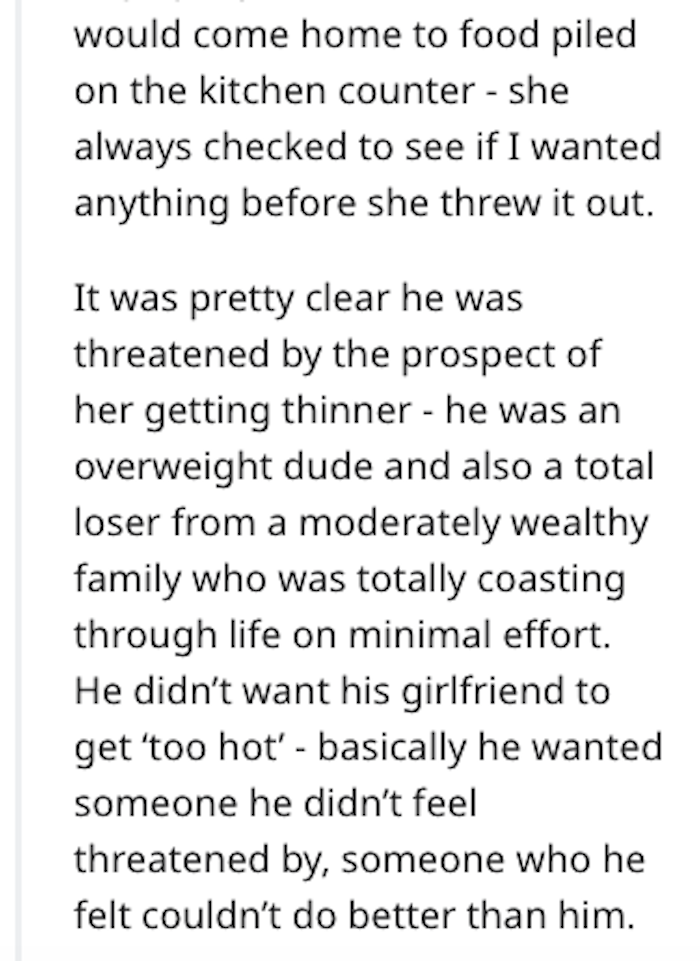 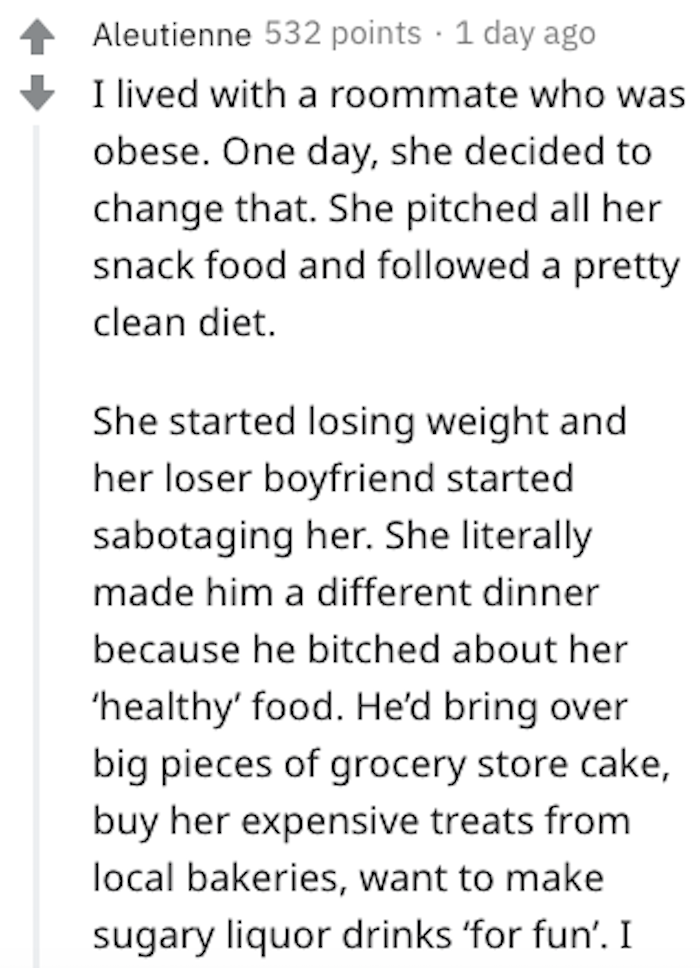 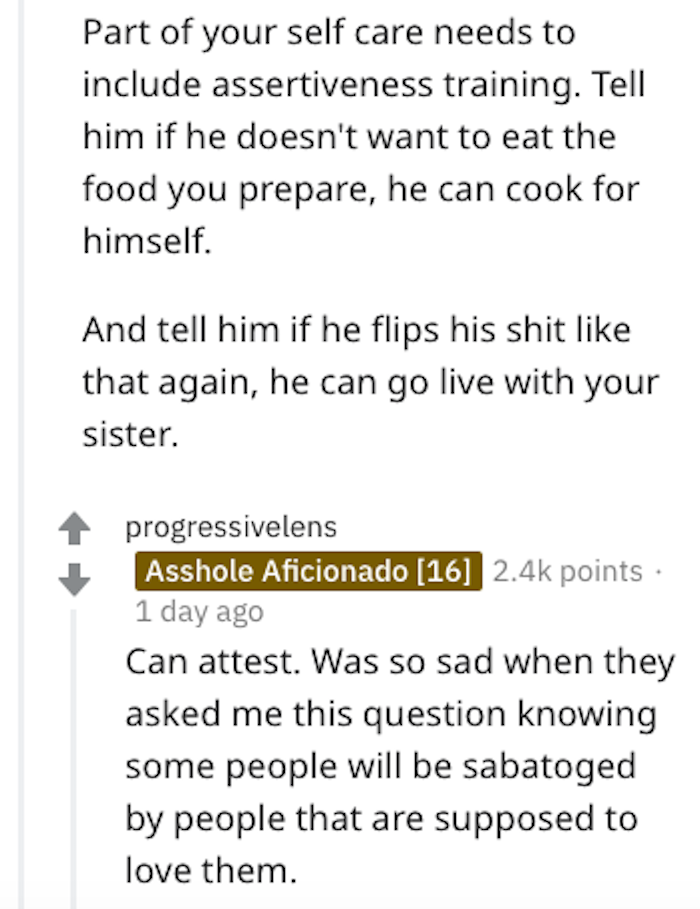 If you want to work out or eat healthily and the people in your life are trying to stop that from happening, they’re definitely the ones who are the problem.