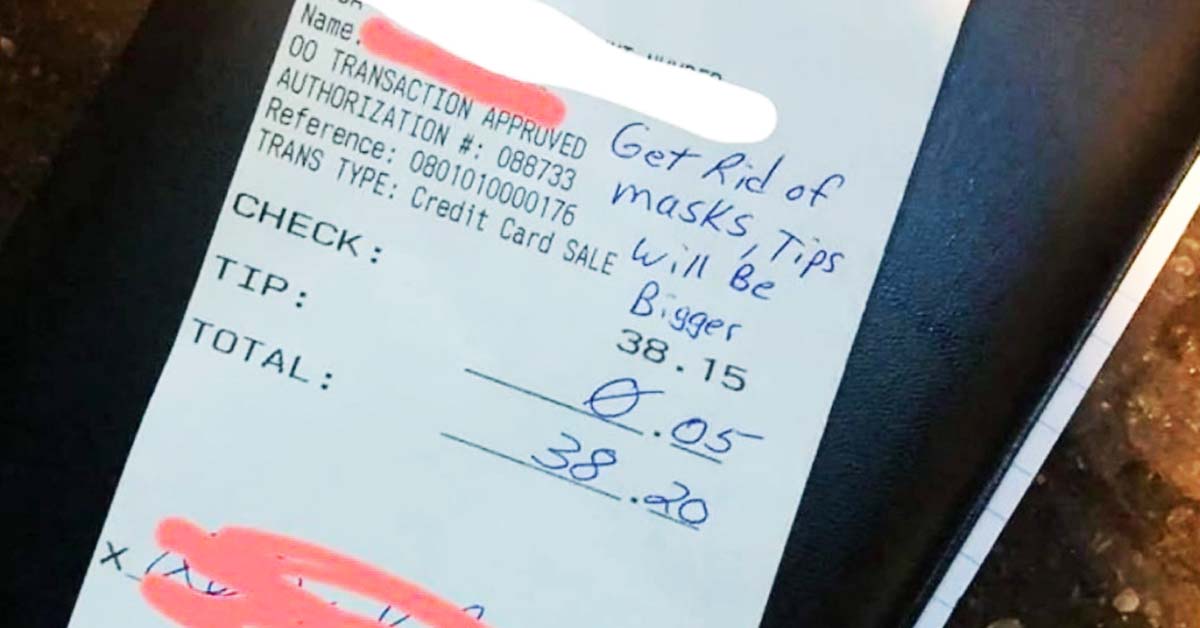 The United States is handling the coronavirus pandemic far worse than any other affluent country, which should send a clear message to people that they need to get with the program and wear a mask, already. Or at the very least, stop misdirecting your anger towards those in retail or hospitality who are required to enforce city and state mandates—as we’ve seen no shortage of Karens having absolute public meltdowns over being asked to wear a mask.

In yet another unfortunate instance, a waitress at a Lincoln, Nebraska sports bar and restaurant, Big Red East, went viral after posting an image of a customer receipt that included just a five-cent tip along with the message, “get rid of masks, tips will be bigger.” 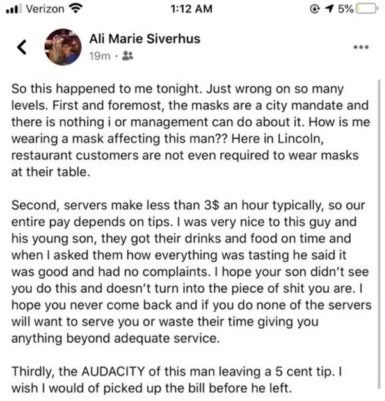 The check was for $38.15, which made the laughable tip less than two percent of the total bill.

“So this happened to me tonight,” wrote the server, Ali Siverhus, in a Facebook post that she also shared on Twitter. (Her account has since been made private.) “Just wrong on so many levels. First and foremost, the masks are a city mandate and there is nothing I or management can do about it. How is me wearing a mask affecting this man?”

“Second, servers make less than $3 an hour typically, so our entire pay depends on tips,” Siverhus continued. “I was very nice to this guy and his young son, they got their drinks and food on time.”

As Siverhus‘s story began to go viral, the man who allegedly left the tip, Rex Shroeder, called Nebraska’s 10/11 NOW News and claimed that he also left $10 cash along with the receipt.

Shroeder also said he never meant for the tip to reflect poorly on the server. He said he meant it to be a “dig at the establishment” as he’s not a fan of the mask mandate in Lincoln.

Be that as it may, the note and five-cent tip came across passive-aggressive at best, and hostile at worst, to a server just trying to make ends meet. Also, just shut up and wear a mask. It can help protect those around you and is really not that big of a deal in the grand scheme of things, as Siverhus later told the parenting website Scary Mommy.

“Customers only have to wear a mask when they aren’t seated, so while they are at their table they are free to take it off. They really only have to wear it for about 30 seconds—from the door to their seat and vice versa—so it really shouldn’t be that big of a deal. And to get upset at the employees who absolutely have to wear the mask to be allowed to work is just ridiculous!”

Those are some good words of advice for the next fool who wants to leave their server a five-cent tip. If you don’t like wearing a mask, no one is forcing you to go out to eat!