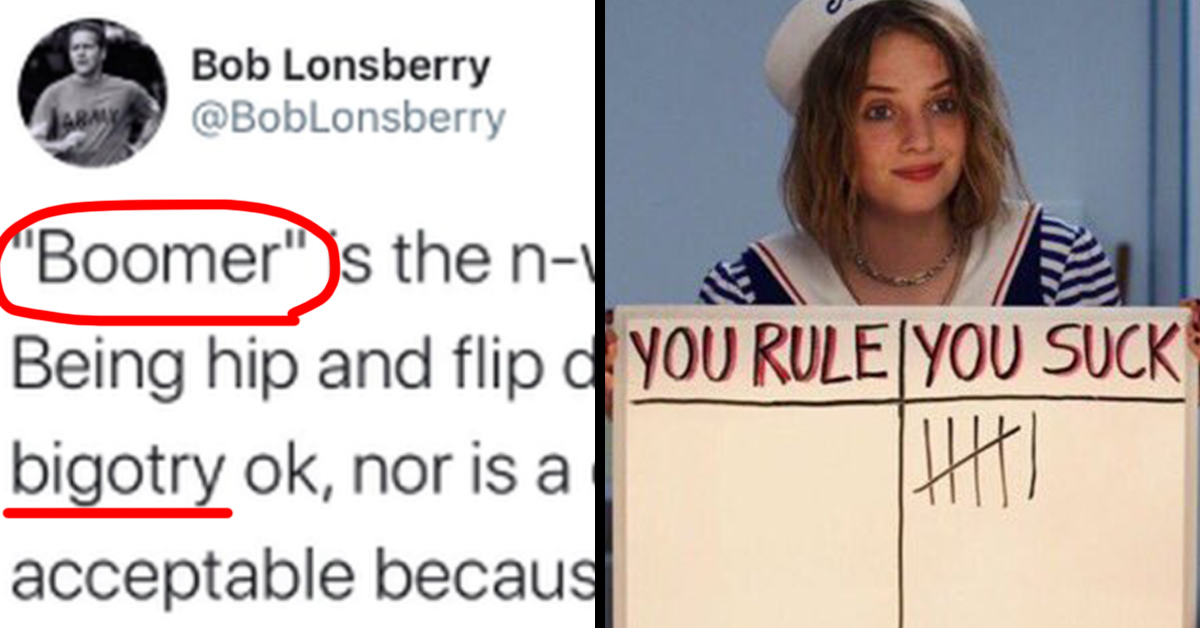 The phrase “okay boomer” has been circulating for a while. It’s a way for younger people to dismiss the opinions of older people who seem clueless, out of touch, condescending, or just plain awful.

Boomers have become so defensive over the term “boomer” that the dictionary was forced to step in.

There is an age-related component to the phrase, since “boomer” generally refers to people born between 1946 and 1965—a group that grew up in economic prosperity, in a time when the wealthy were much more appropriately taxed, people could still afford to buy homes, and it was uncommon for anyone to be saddled with insane amounts of student debt right at graduation.

Not every boomer is doing great by any means, but often their perspective on how money can and should be spent is very different from millennials, their archenemies.

The words “okay boomer” have now become mainstream, after journalist Taylor Lorenz wrote a piece on its meaning for the New York Times. Once something is written up in the Times, you know it’s basically over. But the boomers just discovering this generational dislike are having trouble processing it. They feel attacked!

So attacked, in fact, that a few boomers have jumped immediately to the “it’s like saying the n-word” place. Radio host Bob Lonsberry, in particular, got raked over the coals for comparing the two in a tweet that has since been deleted:

Not sure if he deleted it because he finally felt shame or because too many people responded with “Okay Boomer.”

bob lonsberry after saying boomer was a slur which just caused him to get thousands of replies saying "ok boomer" pic.twitter.com/1owOOtExBZ

But Lonsberry isn’t the only person who thinks this is a fair comparison:

I don’t really have a nickel in the “ok, boomer” dime, but imagine thinking “boomer” was the world’s first ageist slur. pic.twitter.com/vt4qLj3tV2

The Dictionary finally stepped in to correct any misapprehensions about what the word “boomer” actually means, writing, “Boomer is an informal noun referring to a person born during a baby boom, especially one born in the U.S. between 1946 and 1965. The n-word is one of the most offensive words in the English language.”

Boomer is an informal noun referring to a person born during a baby boom, especially one born in the U.S. between 1946 and 1965.

The n-word is one of the most offensive words in the English language. https://t.co/30OAf7N83e

A lot of other people jumped in to say that while ‘boomer’ started as referring to a generation, it actually is much more about a state of mind. Attitude makes the boomer, not age:

hey guys, just found out boomer is a slur :/ out of respect, I’ll be using the phrase “ok racist” going forward, thanks for understanding

The majority of Baby Boomer are "boomers", but so are 35-year-old trust fund Harvard centrists, 16-year-old ROTC dweebs, and 87-year-old fascist sheriffs.

It is purely a diseased mindset, not an ageist slur.

Boomer is not a slur because being a boomer is a state of mind, purely decision based.

Calling someone a Boomer is not ageist. Tomi Lahren is in her 20s and she’s a boomer.

Don’t be a boomer, no matter what age you are.