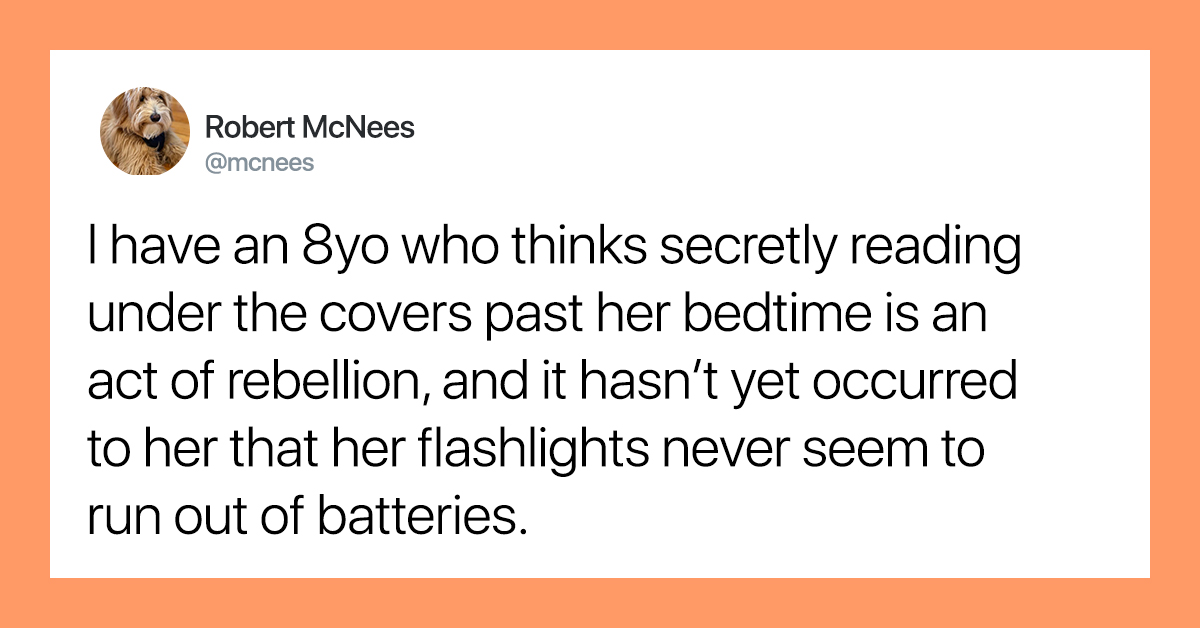 With so much media competing for their attention, it’s surprising that children even know what books are anymore. I was a voracious reader as a kid myself, but if I’d had social media I would probably have flushed The Secret Garden down the toilet and committed to being TikTok famous full-time. Professor Robert McNees shared his tactic for making sure his kid learns to love the written word and it’s basically a psychological experiment.

He tweeted, “Somehow I’ve lucked out and have an 8yo who thinks secretly reading under the covers past her bedtime is an act of rebellion, and it hasn’t yet occurred to her that her flashlights never seem to run out of batteries.”

Lots of people swooped in to suggest a headlamp for the little reader, and he says they tried it but she went back to the flashlight. Reading that though, I do wonder if maybe the eight-year-old is aware something’s up. Maybe the kid is letting the parents think they’re pulling one on her. It’s like the Ocean’s 11 of sneaky reading:

So many nice dad compliments (which I really appreciate) but my wife is in on it too. It takes teamwork to maintain this ruse.

Whatever is going on, these dynamics were familiar to many. The story brought back memories of similarly indulgent and sneaky parents who managed to trick their kids into reading by making it seem forbidden and “adult” to enjoy books:

Adding this to Phase II of the plan.

I had a daughter of that age who clipped small lights to empty glasses frames for that purpose.

My parents noticed me doing the same thing growing up, so they bought me a head torch 😂
Now I’m a huge bookworm and I can’t thank them enough 😊📚

Calvin and Hobbes is a great vocabulary enricher, plus the concepts and irony grow as you age. My younger son loved Calvin!

I was such a bookworm when I was little that whenever I got in trouble, my parents would ground me from reading, rather than from going outside to play 😅 I’d hide under my bed with a flashlight and read anyway… just realizing now I that I somehow never got “caught” 🤔

My parents explicitly told me when I was a kid that if I was in my room at night and they couldn’t hear me, they would just assume I had fallen asleep, even if a light was on. For many years, I thought I was getting away with staying up late reading, no flashlight required.

My sister and I thought we were SO sneaky when we’d beg to read “just one more chapter” before doing our chores. Many many chapters later, we’d eventually do them. Years later mom told us that she figured we’d learn to do chores, but she wanted us to love reading more. It worked!

And when I babysat, the deal I always made with the kids was that I’d let them stay up past their bedtime if they were in bed reading. My tiny movement to create a generation of bookworms.

I did this for so long that my dad got a clip on, plug in reading lamp and put on my bedframe one day while I was at school. He told me he would never be mad for my love of reading/learning ❤ I’ve never stopped since

My mom didn’t care if I read in bed so I didn’t have to hide, except there was this one book when I was 10. She got it from the library & told me I was not to read it, which she never had done before, so of course I read that one undercover. Bad idea. pic.twitter.com/2Bq990zpgq

I remember thinking I was so clever doing this. One night I heard my mom coming down the hall and I did that whole panicked “turn off light and pretend to be asleep” routine. She opened my door and said, “honey just put the light on.” #lifelongbooklover

I used to do this, using the streetlight outside. My mum knew because I hid the books under my pillow. It was never just one book, but multiple hardcover books. Now I’m finishing a masters in English literature, and have over 3 bookcases crammed full of books + 2 more boxes full.

Our rule was that you could go straight to bed, or read in bed until you were sleepy. Everyone had a bed lamp and a basket of books at the bottom of the bed, or a stack on the nightstand. When sleepy enough, they drifted off.

Though there were also some bitter tales of parents who really were trying to keep their kids from reading, either with a bedtime that was restricted or by force-feeding them television instead. I do love television, but forcing kids to watch it like you’re going to church is so co-dependent! Let them have some hobbies, jeez:

You seem like a cool mom. My parents would ground me from reading and take away my library cards and remove all the books from my room and make me sit in the living room and watch tv with everyone else.

My parents forbade reading after lights out. They also made sure we always had working flashlights, because once when my older brother took his lamp under the covers he caught his blanket on fire.

Or were they trying to trick their kids into reading by forcefully denying that they could and it went too far? That’s why this is a grift I can’t approve of—not everyone is as suave as George Clooney over here. Just tell your kids they can read and hide the V.C. Andrews.