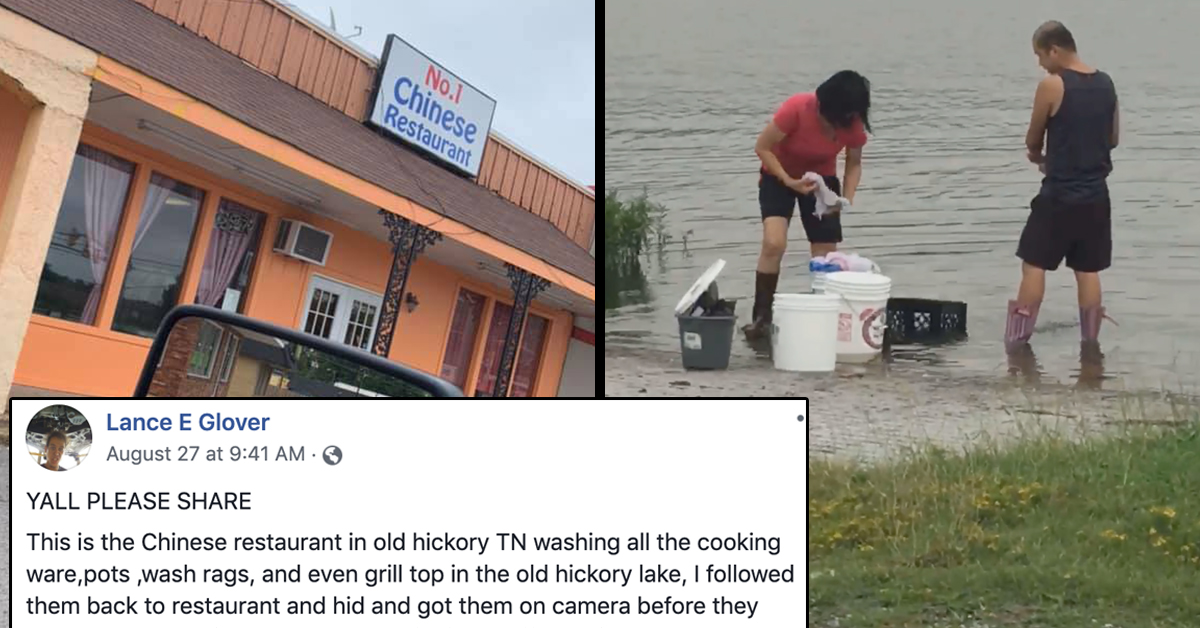 When you hit up your local Chinese spot, you’re probably not expecting the place to have stellar hygiene ratings. It’s a takeout joint—you’re looking for MSG-laced goodness and a week’s worth of sodium in one meal, not a high-end dining experience.

However, a Tennessee Chinese restaurant really flaunted their disregard for following basic health and safety procedures after employees were caught washing kitchen equipment in a local lake, leading to them being shut down.

Facebook user Lance Glover took to Facebook on Tuesday to post videos of staff of No. 1 Chinese Restaurant in Old Hickory, Tennessee cleaning pots, cooking utensils, and even the grill top in a lake close to the property.

Glover claimed that the employees stopped once they realized they were being filmed and that he’s seen them do this on numerous occasions previously.

The post understandably went viral and raised enough concern for someone to call the local health inspector, who shut them down immediately.

Apparently, the restaurant’s owners initially claimed that they were only washing their own personal rags in the lake for cultural reasons, though they had to admit the truth once they were confronted with video proof.

Hugh Atkins, Director of the Bureau of Environmental Health Services at the Metro Health Department, told NewsChannel5, “Their explanation was it was a drain that collected a lot of grease, and they wanted to wash it somewhere where that grease wasn’t going down their drain. It’s disturbing to see something like that.”

After the video was posted to Facebook, the health inspector temporarily closed No. 1 Chinese Restaurant in Tennessee. https://t.co/4RukFW6szH

The owner’s daughter, Michelle Pan, claimed that this was no big deal since her parents had been washing kitchen equipment like this for years and no one had ever gotten sick.

Besides, it’s not like any of the stuff they were washing had direct contact with food, right? While their genuinely solid health and safety record seems to confirm what Pan was saying, I think I speak for most people when I say this is still NOT OKAY.

The Health Department instructed the Chinese restaurant’s owners on proper cleaning procedures and other things that needed to be done before they would be allowed to reopen. To No. 1 Chinese’s credit, they seem to have complied and are already open again, though I’m not sure how much business they’ll get moving forward.