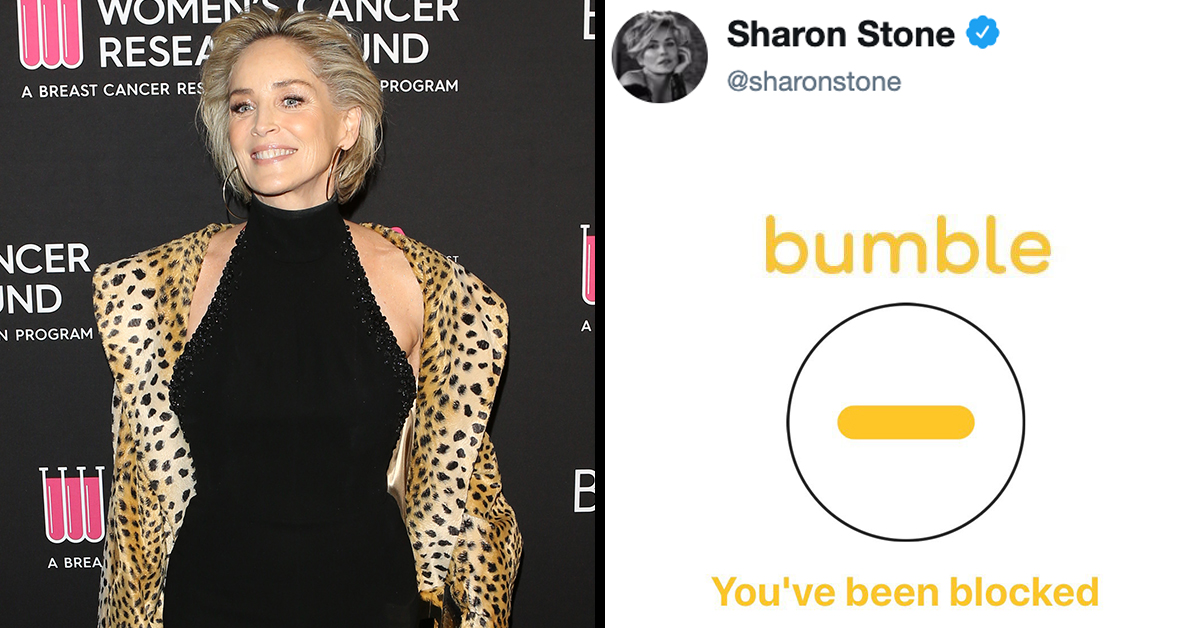 Being a celebrity has a lot of benefits, but there are some downsides most of us normals probably don’t think about much. For one, how hard is it to get a date on a Friday night? I’ve always assumed that celebrities have some sort of expensive matchmaker who helps them find someone on their level. But that’s not how it works, apparently, especially when you’re Sharon Stone and no one is on your level.

The actress tweeted at dating app Bumble to let them know that she’d been kicked off their platform because no one believed it was really her, writing, “I went on the @bumble dating sight and they closed my account.  Some users reported that it couldn’t possibly be me! Hey @bumble, is being me exclusionary? Don’t shut me out of the hive.”

Damn. I never considered how hard it must be for Sharon Stone to get a not-weird date.

I went on the @bumble dating sight and they closed my account. 👁👁
Some users reported that it couldn’t possibly be me!
Hey @bumble, is being me exclusionary ? 🤷🏼‍♀️
Don’t shut me out of the hive 🐝

She also shared a screenshot of her blocked notification as proof:

Hey, I don’t have bumble but uh… what are you doing like six months from now?

talk to ya soon

So @Sharonstone, what kind of woman are you looking for?

I don’t blame them. I’m a straight woman, and I almost did the same.

Go on date with you I will.

Sharon, don’t worry about it as I have the perfect date for you..my brother Bruce Buffer..he’s handsome, famous, intelligent, traveled, witty, worldly, athletic, well off financially, perfect age for you and available! Just google him for info and history!@brucebuffer #ItsTime

Let’s see here.
Overly successful woman who is revered beyond her personal accolades can’t find a man secure enough to date her while constantly being in her shadow. I’m shocked. #malefragility

Umm, get Sharon Stone back on your wretched grid this goddamn instant and apologize for the audacity.

Take out a few thousand Finance Bros whose bios are a string of flag emojis if you need to make server space, you fools.

If Sharon Stone can’t get a date, honestly, there’s no hope for the rest of us. I’ll just settle for life with my books📚 & my 3 cats 🐈 🐈 🐈… pic.twitter.com/yOTtl7mU6J

Weird speedbumps like this give the rest of us hope that our speedbumps are not so special and this is all just bumps.

But the most excited people of all were the higher-ups at Bumble, who realized this was a marketing opportunity that could not be passed up. Not only was Bumble trending, but everyone reading this thread would know they might end up swiping on Sharon Stone—as soon as she was reinstated:

Dear Bumble, you are confusing my honesty with your fantasy. This is a disservice to the men and women who partake in @bumble. I am Sharon, I am a woman. Thank you.♥️https://t.co/C1FlN2PsDX

Sounds like plenty of time to set up a Bumble profile. 🐝

So you see, no one is thirstier than a dating app is, not even the Reply Guys in Sharon’s mentions.