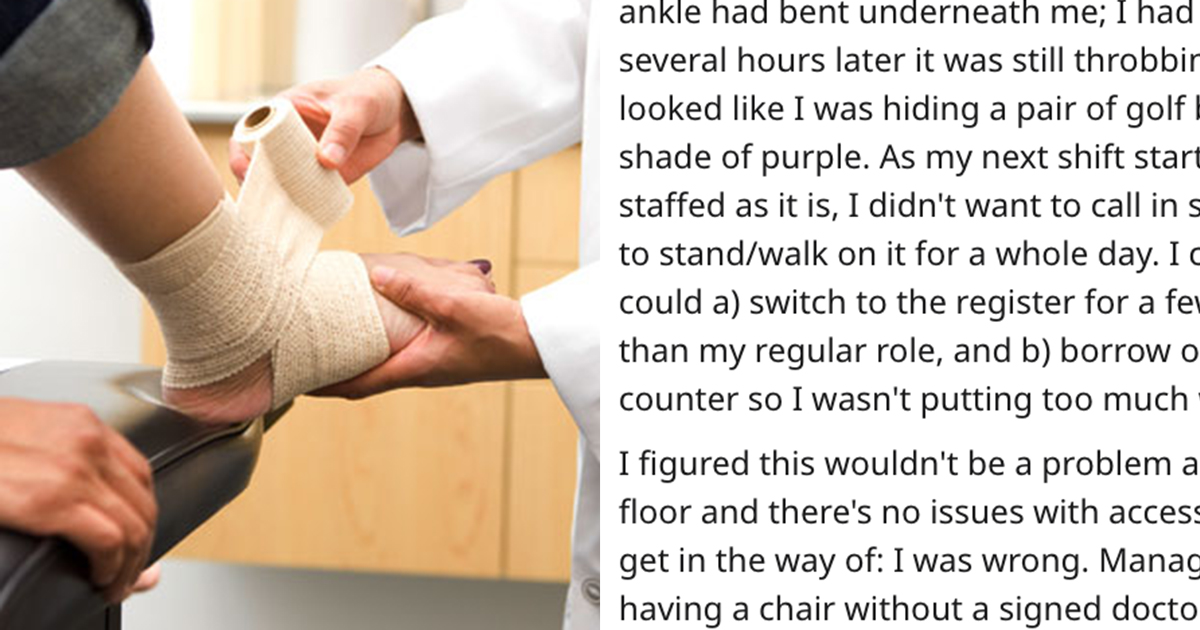 Most of us have had our fair share of truly crappy bosses, but the worst kind of boss is the one who puts the company’s needs over the health of its employees. Sure, there’s something to be said for that one staff member who seems to always be calling in over the slightest perceived cold, but for the most part, if someone says they can’t come into work due to injury or illness, they really can’t.

This Redditor, for example, had to call into work after being hospitalized with a serious leg injury and their boss had the worst possible response.

Redditor u/et-regina recently shared a story about her a-hole boss who demanded proof that she was seriously injured.

So since some 11k people liked my last story of malicious compliance at work, have another!

At the time I worked in a cafe set over 3 floors, so my day generally consisted of 10 hours running up and down stairs.

I had slipped on some spilt motor oil in the car park on my way home and my ankle had bent underneath me; I had initially assumed I’d just twisted it, but several hours later it was still throbbing, as well as swelling up so much that it looked like I was hiding a pair of golf balls under my sock and turning a deep shade of purple. As my next shift started in less than 12 hours and we were short staffed as it is, I didn’t want to call in sick, but I knew there was no way I’d be able to stand/walk on it for a whole day. I called my manager to explain and to ask if I could a) switch to the register for a few days, which involved much less walking than my regular role, and b) borrow one of the bar stools to sit on behind the counter so I wasn’t putting too much weight on it.

I figured this wouldn’t be a problem as we had other staff who could cover the floor and there’s no issues with access around the register that the chair could get in the way of: I was wrong. Manager insisted that he wouldn’t sign off on me having a chair without a signed doctors note verifying my injury, even after I sent him photos of my wrecked ankle.

As my GP was already closed, I headed to the 24 hour walk in clinic. An x-ray and a lot of poking and prodding later, the doctor told me I had to ice it every few hours until the swelling went down (which took almost a week) and keep all weight off it for at least a week, and wear a brace for another 2 weeks after that. When I explained what I did for a living, the doctor presented me with a lovely note explaining that I shouldn’t be at work at all for at least 7 days.

I wish I could have seen my managers face when I called to explain that I didn’t need the chair after all as actually I wouldn’t be in work for the rest of the week and most of next week, doctors orders. Funnily enough I was never asked to produce a doctors note again for the rest of the time I worked there.

This experience taught et-regina, who has since moved into management, to always have empathy for her employees.

EDIT: You’ll be pleased to hear that several years later my ankle heeled with zero longterm affects and I’m now in management myself, hopefully treating staff a lot better than I was treated. Also as SO MANY of you have pointed out, please go to the doctor if you injure yourself regardless of whether or not a dickhead manager demands it or not.

And most people could relate to having an unreasonable boss.