Even before the pandemic, I was a firm believer in “Halloween All Year Long.” It’s truly the best holiday. You run around trying to scare yourself, get to dress up or dress up adorable small children, eat candy and drink cider, wander around cemeteries, summon ancient spirits. Also, the movie selections are killer. What’s not to like?

Well, Halloween may be canceled this year, but I’m not letting that stop me from embracing the essence of the season. Let’s truly make Halloween both safe and never-ending this year, starting with this spooky TikTok showing what looks like a “shadow figure” at an abandoned hospital.

The TikTok in question, uploaded by user @noah.vq, shows viewers what it’s like to work as security at a “practically abandoned hospital,” and it racked over half a million views. According to Noah, the night shifts can get pretty scary. He was doing his rounds when he heard a noise coming down an empty hall. He decided to take out his phone and record.

As the video shows, the hospital floor Noah is on is empty. “I was hearing some noise coming up right now,” he says in the video. “It’s kinda freaking me out so I’m gonna be filming a little bit.”

We see several empty rooms before passing one that appears to be occupied. By what looks like a shadowy figure! Is it a ghost? Or just some guy trying to get some peace and quiet in an abandoned hospital? 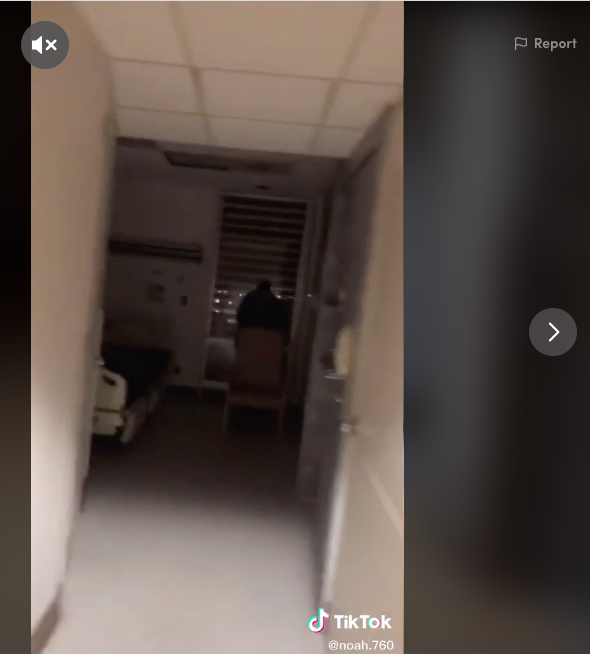 Viewers debated whether the entity was the spirit of someone who had died in that room or whether it was a true “shadow person”—which is a supernatural entity that many believe is aggressive. Of course, many people were convinced that Noah’s video was a good fake. You know what? I don’t care! Halloween all year, baby!