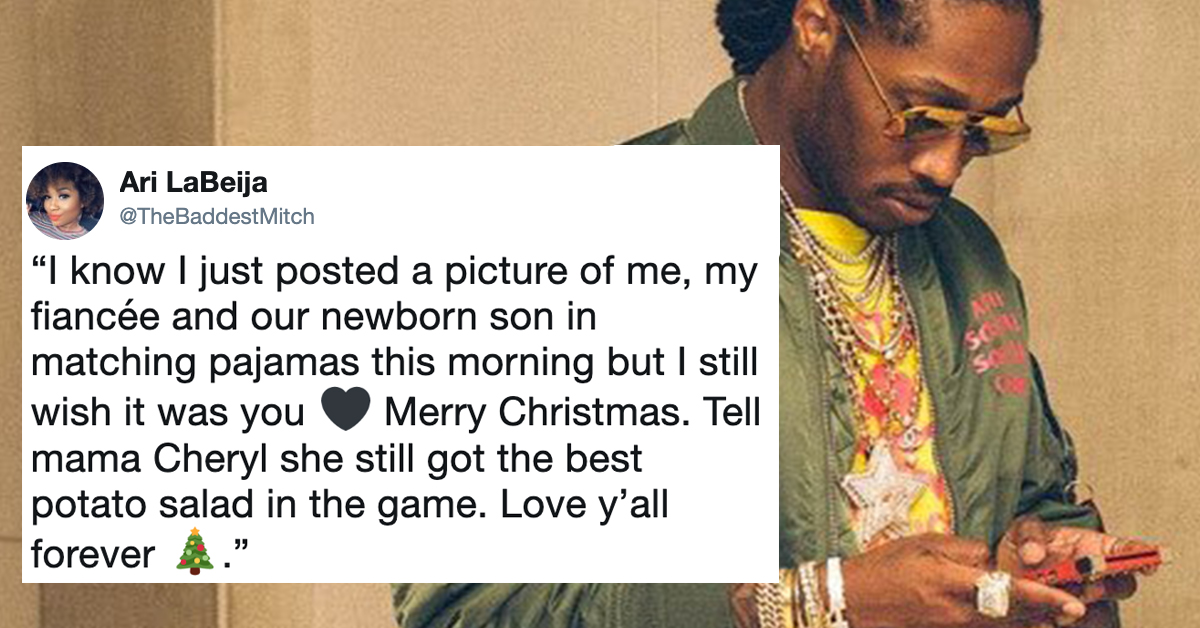 This recipe for disaster will have you drunk texting every number in your phone, from somebody you haven’t seen since junior high all the way up to that Postmates delivery guy who got lost on your block last week. It’s a time that brings up a lot of feelings, but the most dangerous feelings of all are the ones you’ll suddenly have for your ex again.

“Happy Thanksgiving. I just wanna let you know I’m thankful for you & all the times we had. Tell your mom too. Miss you,” he wrote. Deep.

I just wanna let you know I’m thankful for you & all the times we had.

Tell your mom too.

He also had advice for guys who were trying to start things up again for Thanksgiving, saying, “You gotta send these as separate texts btw fellas. Maybe wait bout a minute or two in between each one too.”

You gotta send these as separate texts btw fellas. Maybe wait bout a minute or two in between each one too 🏅

People obviously found the meme pretty relatable, because soon everyone was doing it, like @BlvkKing who wrote a magnum opus, captioning the Future pic with,  “Happy Thanksgiving, hope you’re well. I just wanted to say I’m thankful for everything you are. You a blessing, even when I couldn’t see that. I miss us but I see you’re happy with your new man. If you ever need a friend I’m always here. You don’t have to respond, just be well.”

“Happy Thanksgiving, hope you’re well. I just wanted to say I’m thankful for everything you are. You a blessing, even when I couldn’t see that. I miss us but I see you’re happy with your new man. If you ever need a friend I’m always here. You don’t have to respond, just be well” pic.twitter.com/JmpNyhxfaZ

There were many iterations throughout Thanksgiving:

“Bitch I know you seen my Thanksgiving text. Quit fuckin playin wit me. Tell ya momma I said Merry Christmas and save me a plate.” pic.twitter.com/9JfhZITdwZ

“I know I’m a day late but I hope you had a happy Thanksgiving. We haven’t talked in a while but wanted to tell you that you’re one of the lessons I’m most grateful for this year. I know we lost our spark but you always in my heart, you don’t have to respond just wanted to say.” pic.twitter.com/GjHsQVdCbZ

But Christmas was right around the corner. Time to fire up that Future texting meme again, and tell everyone you used to date that Christmas trees always make you think of them!

“I saw a Paw Patrol commercial this morning and it made me think of lil man. Hope you was able to get him everything he wanted. You’re an amazing mother so I know you made it happen. Merry Christmas to you and tell lil man I said Merry Christmas.” pic.twitter.com/1v52Bu3zEl

“I know you don’t fwm at the moment, but Merry Christmas. My lil cousins asked when they were going to see you again…crazy ain’t it lol. But I just wanted to see if you were good. Have a good day and tell everybody I said hey.” pic.twitter.com/0o9PyYxv8L

“Merry Christmas love.. you don’t have to reply. I have a gift for you at my house, it’s here if you want it. It’s not wrapped up but you know how we get down, ahaha..well used to but anyway.. tell your family I said hey, I know this their favorite holiday.” pic.twitter.com/WOuZnVP0Ik

“I know I just posted a picture of me, my fiancée and our newborn son in matching pajamas this morning but I still wish it was you 🖤 Merry Christmas. Tell mama Cheryl she still got the best potato salad in the game. Love y’all forever 🎄.” pic.twitter.com/m0HlML7dt3

“I know I’m the last person you want to talk to, but I still wanted to be the first to wish you a merry Christmas” pic.twitter.com/IU1Cmh8yFY

Hey Merry Christmas 🎄☺️… you don’t have to reply… just wanted to let you know that there’s no reason for us to be enemies.. what’s done is done and I rather go into the new year not having us be on bad terms… you will always be special to me and I’m always here for you pic.twitter.com/RoHfNbRLFN

Eventually, it turned around and became about those of Future’s rumored girlfriend, Lori Harvey, according to the Daily Dot. Is she texting her ex while Future is in the next room?

“ all I wanted for Christmas was for us to be together but you rather be with that other bitch, anyway how yo loud ass mama doing? she never liked me but ion give a fuck, I know you miss me tho, don’t text back cause my nigga with me rn ❤️ “ pic.twitter.com/X68C2EbSuL

“Damn. Today would’ve been our son’s second Christmas. I know you wanted to keep him but I just wasn’t ready. I am now. I know you probably hate me 😔😔😔 but I hope you enjoy your Christmas. Praying for you and the fam ❤️” pic.twitter.com/khga1gGGeV

“I had a crazy dream about you last night and I needed to check on you. I know we’re not on the best of terms, but I hope you’re doing okay. Tell your mom I said Merry Christmas. Enjoy your holiday.” pic.twitter.com/pKhmIN6qny

We all have an ex we think about texting when the music and wine is flowing. Log onto Twitter and read how ridiculous you sound instead. You’ll thank yourself on January 1st.