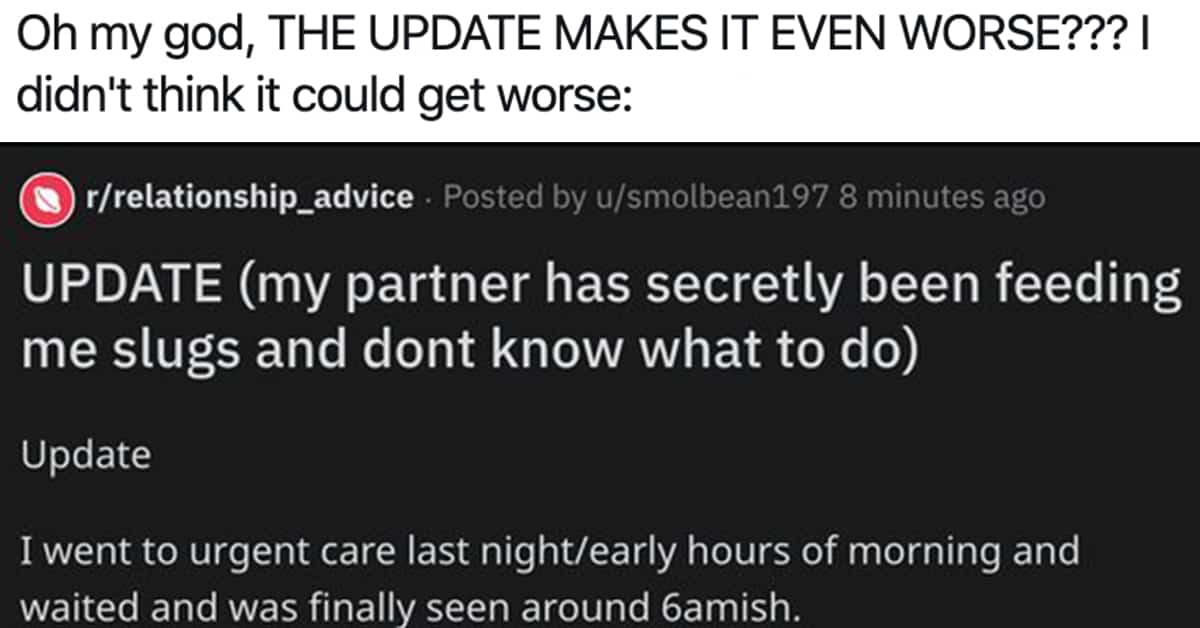 There are a lot of messed up stories on the subreddit r/Relationships, but this might be one of the most WTF ones I’ve ever read. Like many of these stories, it involves a woman having something absolutely horrific done to her yet she is unsure if she should dump the person who did it.

The original post has been deleted by the mods, as has the user’s account, it seems. The comments remain and the original text was captured by @redditships on Twitter. Why was this story worthy of so much attention? Well, it’s because the OP wanted to know if she should break up with her boyfriend because he was poisoning her…with slugs.

Yes. He was collecting slugs, grinding them up, and putting them in her food. And she wasn’t sure if she was overreacting.

My partner has been putting slugs in my food for the pasr 2 weeks (cw: wtfffff) https://t.co/lJAKmTG1Vp pic.twitter.com/xDBatyaYjH

The woman writes she’s 22 and her 24-year-old boyfriend has been with her for four years. She says the past few months he started acting kinda weird (nice).

“He started being really nice to be around two weeks ago and was making me food, baking me cakes and stuff, she writes. “I did notice sometimes I felt sick and dizzy after eating and I just put it down to lack of sleep / hormones.”

Nope. One day, her boyfriend’s friend came into to her workplace looking to talk. She writes, “He told me that my partner has been collecting slugs from the garden on fruit he has been putting out there and putting them in my food. Blending them up. He even sent his friend pictures of a bag of slugs he had collected and the picture of blended slugs.” 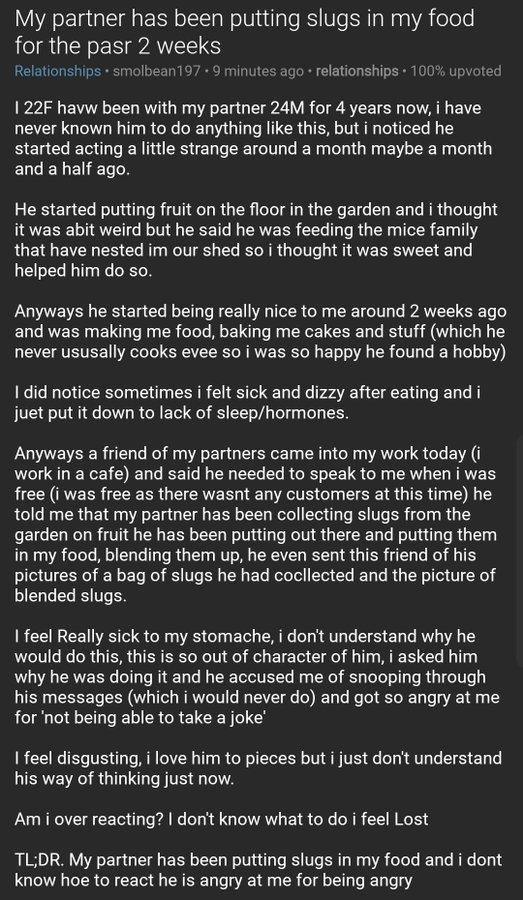 If you can’t imagine this getting worse, it can! A few months ago, the OP had ulcers and was hospitalized. She thought they might have been due to stress and is now wondering if it could be poisoning.

She also has other underlying health problems and is supposed to have heart surgery later in the year. While writing the post, she went to the doctor with an unexplained fever, and finally, after much urging from Reddit, contacted the police and filed a report. Her ex was confronted but wouldn’t say anything to the police or her. He agreed to talk to his friend. 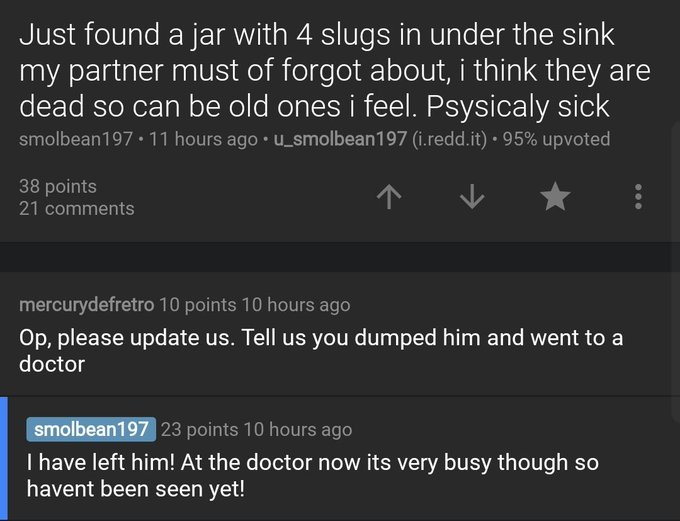 “He confessed to doing random experiments on me / tests starting a few months after we moved in together,” she updated. Wow, Mr. Science.

Oh my god, THE UPDATE MAKES IT EVEN WORSE??? I didn’t think it could get worse: https://t.co/E9zB7AYxGS pic.twitter.com/60slJmfzry 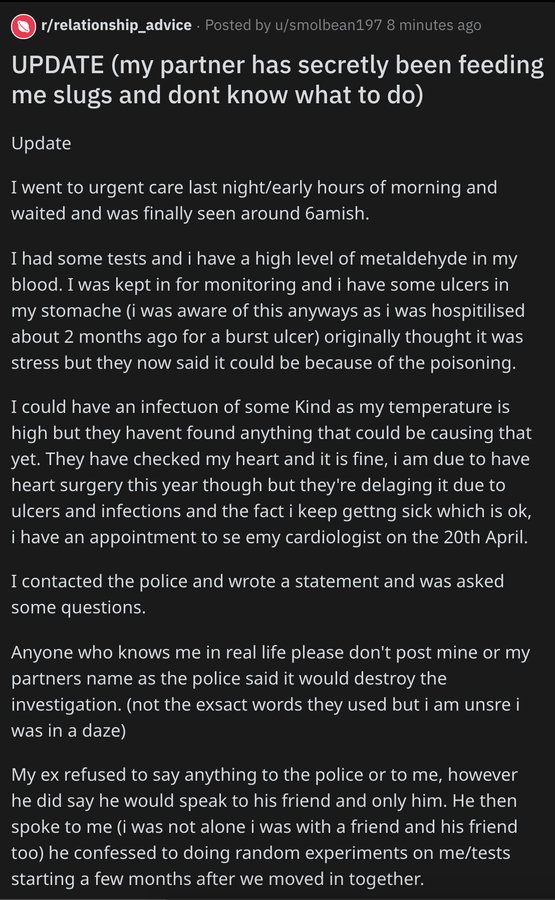 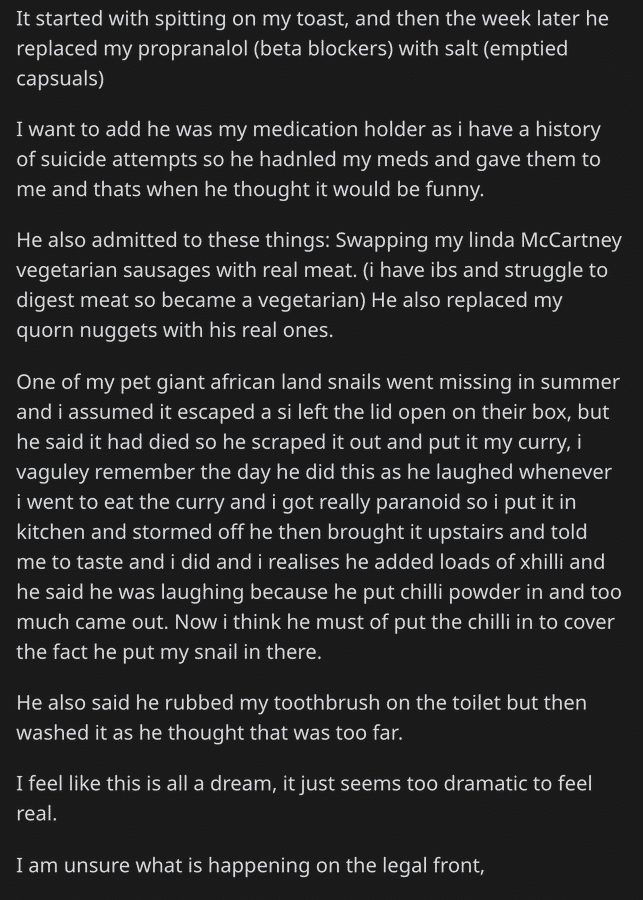 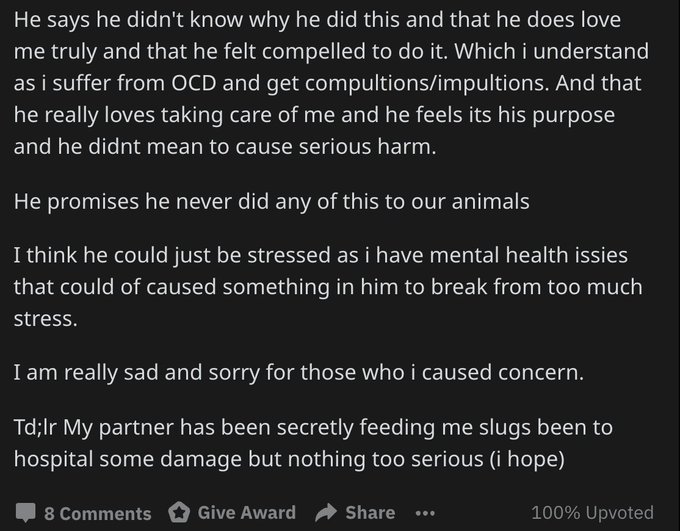 Those experiments included: spitting on her toast, replacing her medication with salt by emptying the tablets. Yes, he is her “medication holder” since she says she has a history of attempting suicide. He claims thought it would be “funny” to do these things.

She also has trouble digesting meat and he swapped out her veggie sausages for real meat and replaced her fake chicken nuggets with real ones. And he admitted to rubbing her toothbrush on the toilet. He washed it after because he thought it went “too far.” Weird line to draw considering everything else, but I guess! Finally, this isn’t his first trick with mollusks:

Well. I guess I’m done with breakfast. (Also, I’m going to be posting a picture of the slugs in a reply so… brace yourselves) pic.twitter.com/ev3G6dl5uw

“One of my pet giant African land snails went missing in summer, and I assumed it escaped as I left the lid open on their box, but he said it had died, so he scraped it out and put it in my curry.”

She says she was even suspicious at the time because he laughed whenever she took a bite of curry. She got paranoid and walked away. He told her he was laughing because he’d put too much chili powder in it.

“Now,” she writes, “I think he must have put the chili in to cover the fact he put my snail in there.”

This boyfriend has said he felt “compelled” to do all these things but he still loves her. She has written, “He’s really stressed out, so I can kind of understand.” 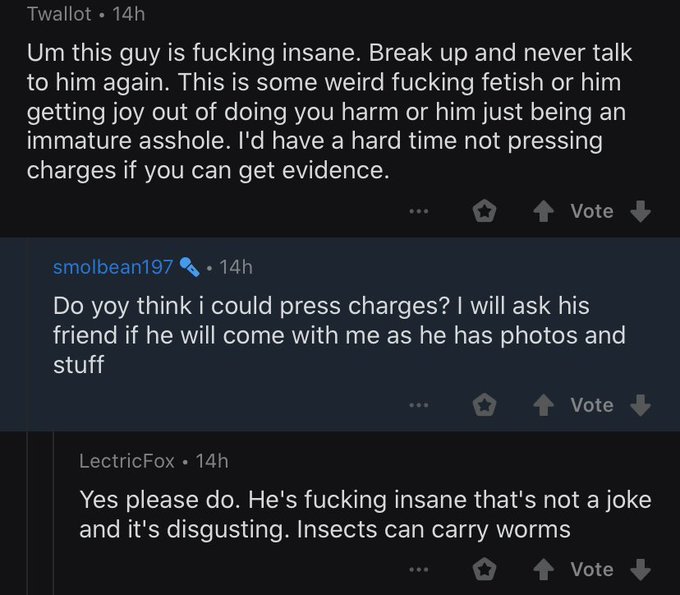 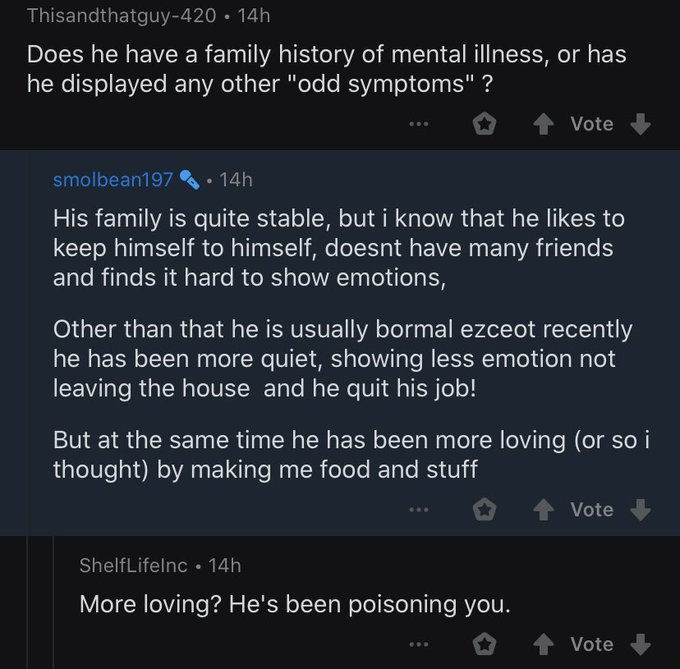 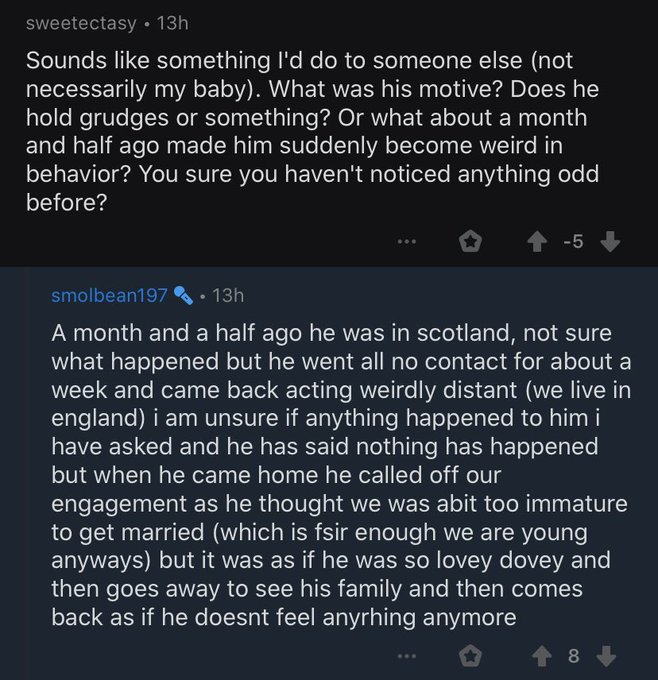 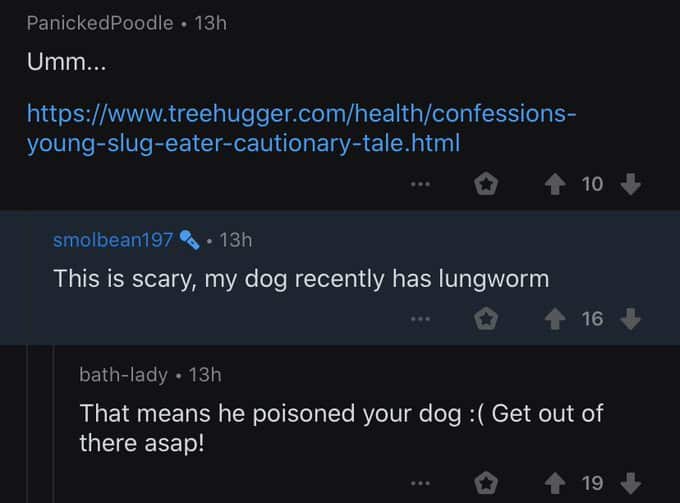 I just re-read this awful post. This man is actively, systematically trying to poison his girlfriend, leading to her health deteriorating.

She asks, should I try to understand him better? Is it really serious?

He must have been working on her for a very long time. Appalling.

And how ALL of them still need support from Reddit because they’re not sure if they’re overreacting. JFC.

I’m over it. I’m locked up at home and this is the content I get!?

I was so busy worrying about Covid-19, I forgot about the public health menace that is straight men in their 20s

I can’t believe I have to say this, but if someone is poisoning you, they don’t love you. If there is any bright side to this whatsoever, she has updated to say she left him. Thank. Goodness. Please get basic respect of other humans beings taught in the classroom.