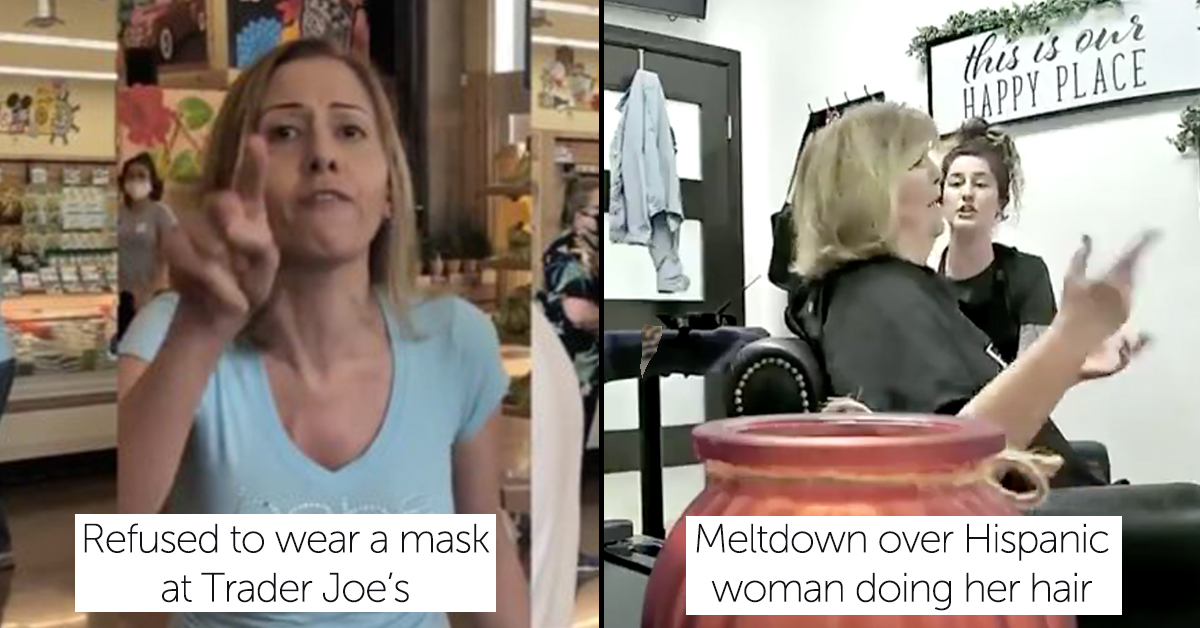 This year, entitled people everywhere doubled down on being terrible even in the midst of the world going off the rails.

You’d think people would use the trashcan fire that is 2020 as an excuse to be more compassionate, to tip servers more, to not… scream at a Trader Joe’s about federal law. Unfortunately, Karens took a different route.

Funny you should ask. A Karen is a specific type of privileged white person (usually a woman, but as we’ll see, male Karens are emerging. That’s called progress), who wants to “speak to the manager” whenever something doesn’t go her way.

It’s not, however, any woman named Karen. For instance, Karen Gillan is decidedly NOT “a Karen.”

This woman, however, although named Patricia… is definitely a Karen:

‘She had her finger on the trigger and looked nervous and I became a little bit more worried’: @Reuters photographer Lawrence Bryant on capturing St. Louis couple Mark and Patricia McCloskey waving guns at anti-racism protesters https://t.co/KtYZPjlWVB pic.twitter.com/q8tV16iBi4

Now that we’ve cleared that up, let’s see who else acted like a Karen this year.

Here are the most Karen-y Karen moments of 2020:

This woman was asked to wear a mask at a Trader Joe’s, and she lost her mind. This was apparently the first day the location was open, and even Karens have to eat.

In case it wasn’t clear what happened, this Karen told us exactly what went down in the most Karen way possible.

This is the nicest way to deal with a Karen. A woman named Robin, who’s been a client of hairstylist Sharon Spellman for a long time, complained that a Hispanic assistant was touching up her hair. Spellman was nice about it, but then this happened…

Racist white woman demands hair salon owner finish her root touch up — not her Hispanic employee. Then tries to assault the owner before realizing she was on camera.

“Robin that was a lot.” What else can you say besides “get out”? Well, Sharon Spellman had a lot to add to the story, and did so on Instagram:

3. This Scottish tattoo artist taught us how to curse out a “Male Karen.”

A Male Karen wanted a tattoo for himself and his partner, but also, wanted to make sure the manager got an earful of nonsense. He had been denied service by someone claiming to be the owner… 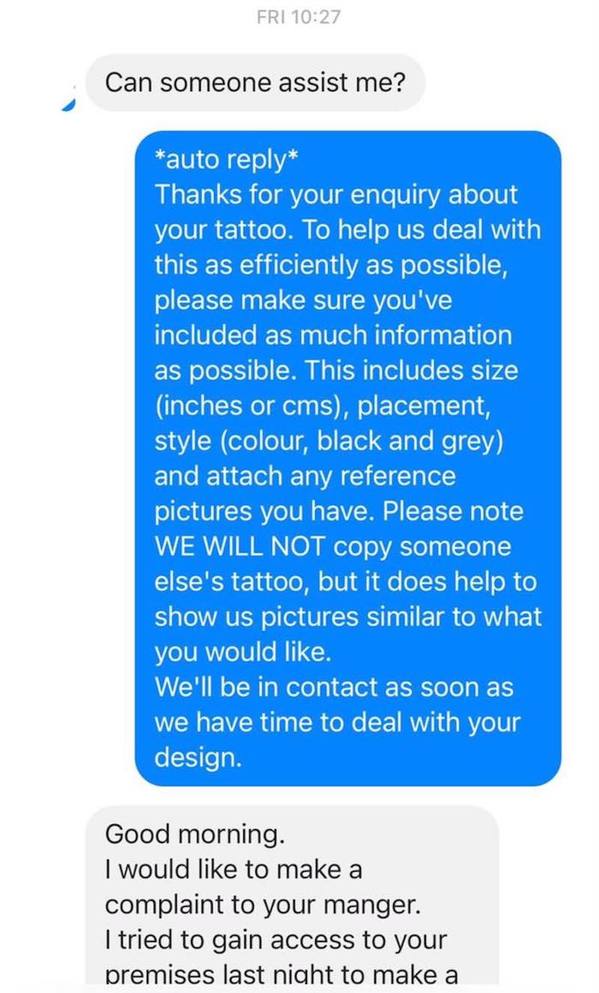 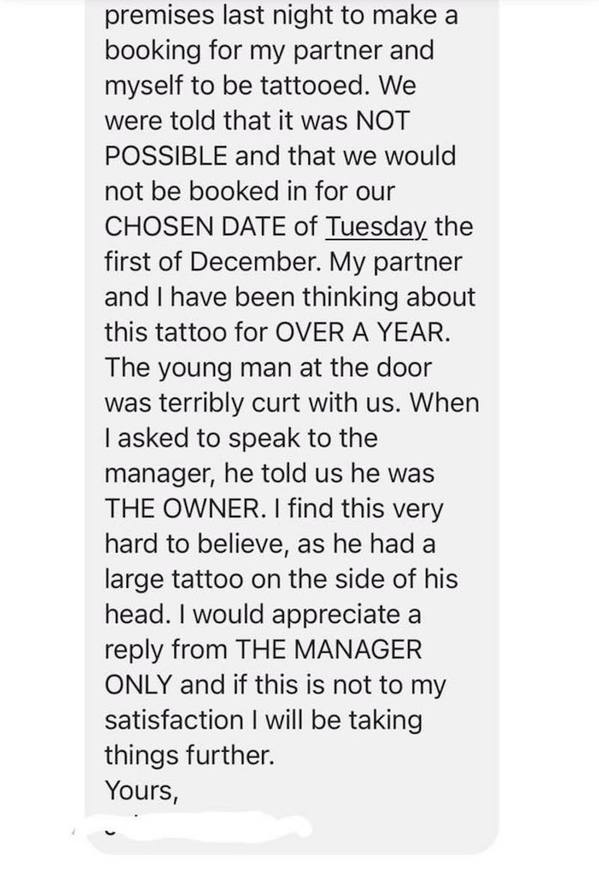 After the owner read this message, he made sure to give a proper response, in proper Scottish slang. 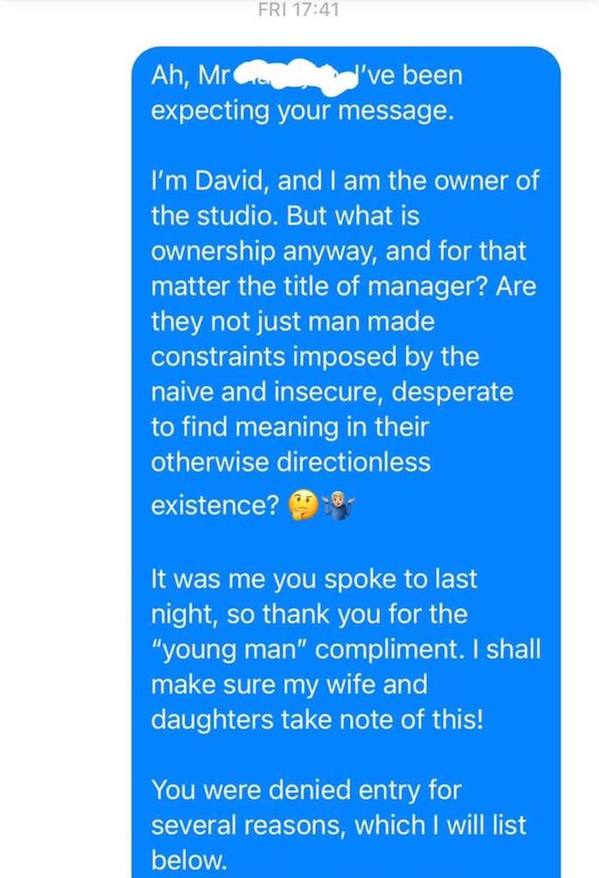 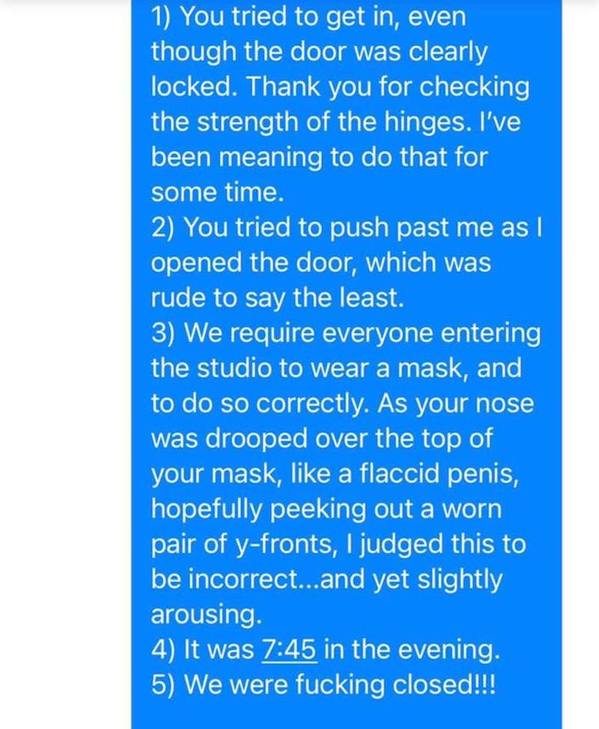 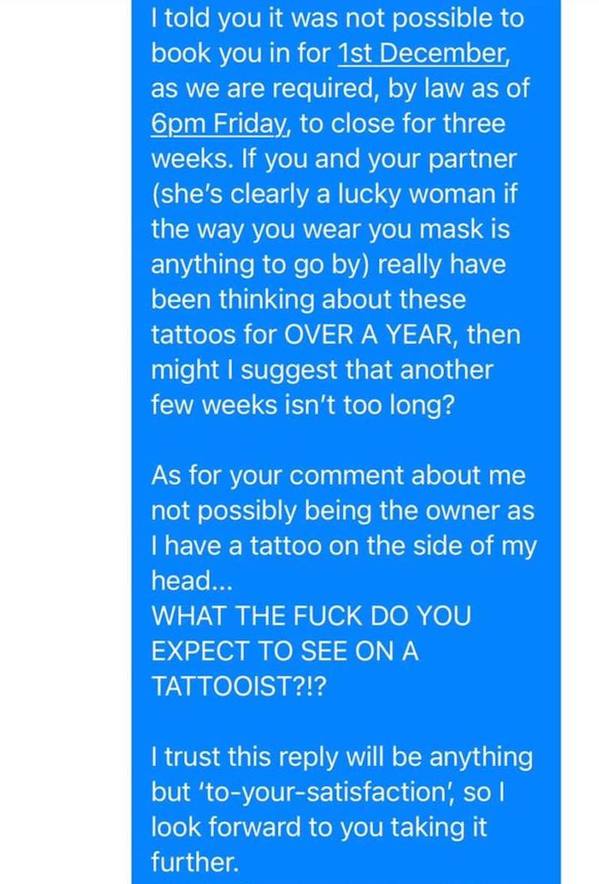 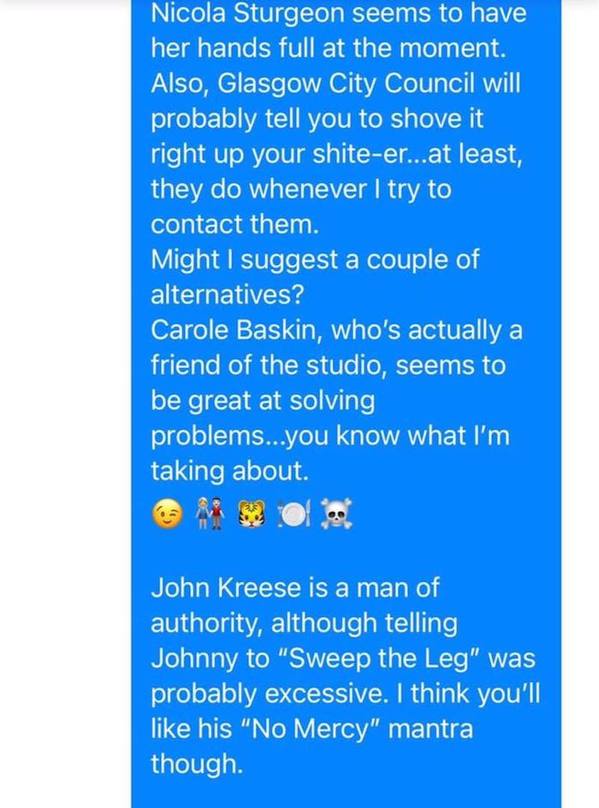 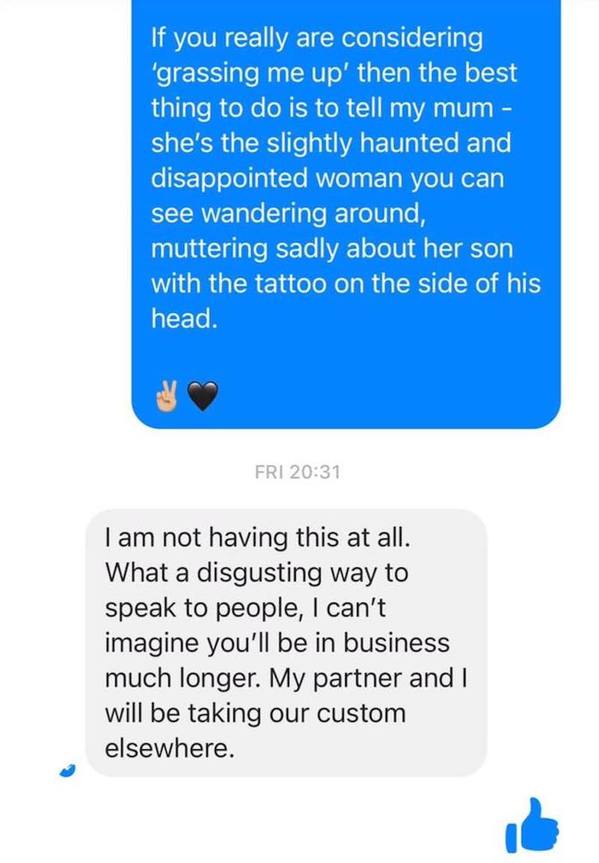 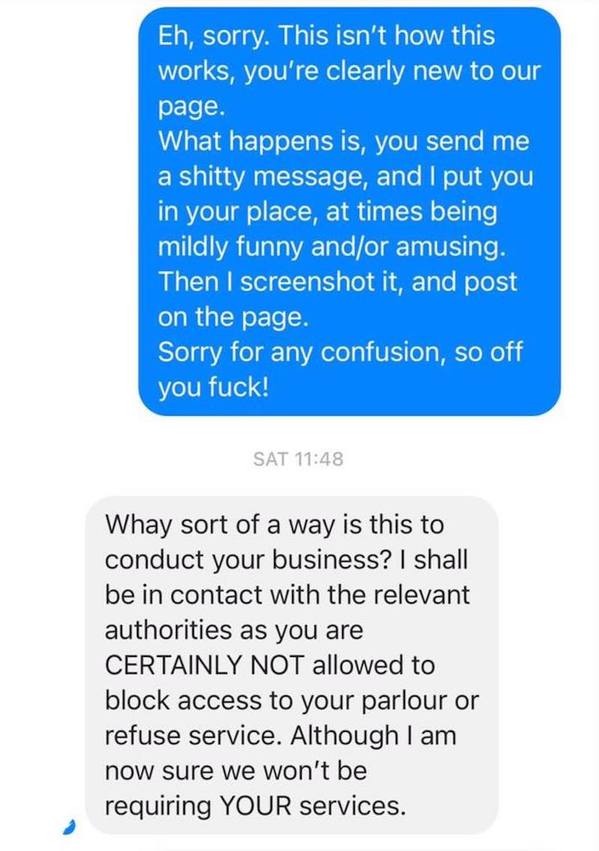 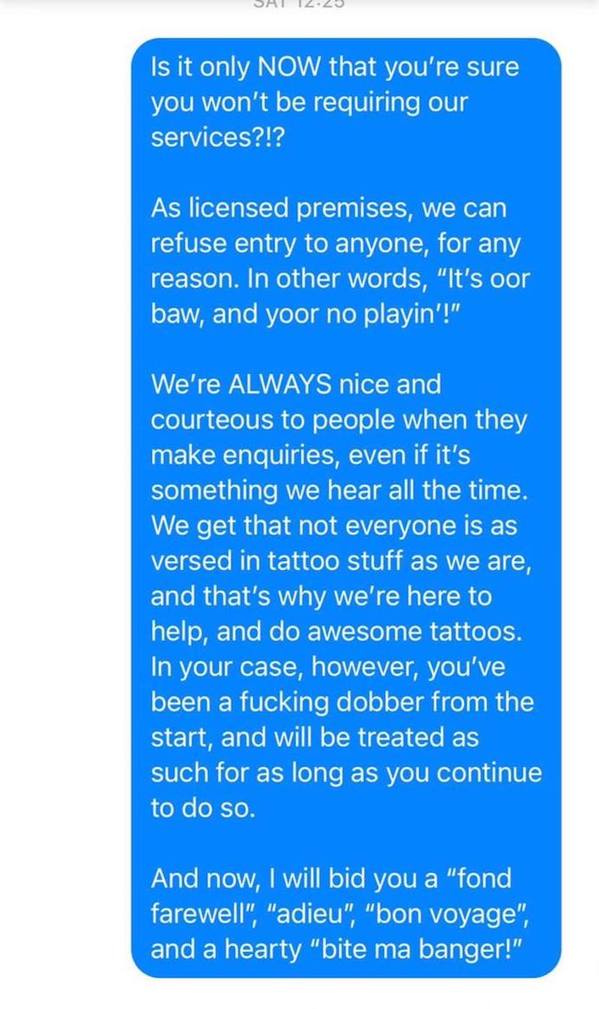 I assume “Bite ma banger” is the new “have a nice day!” Again, though Karen Gillan is not a Karen, she is Scottish and could probably translate this for us.

4. A Karen tried to scare people away from getting their children vaccinated with her dumb Halloween costume.

Karens all think their ideas are perfect. They’re perfect. Why shouldn’t everything that jumps out of their skull be perfect also? This woman dressed as measles for Halloween, expecting to make a valid point. Instead, she showed her whole ass (as the kids say) and got owned by everyone using the internet that day. 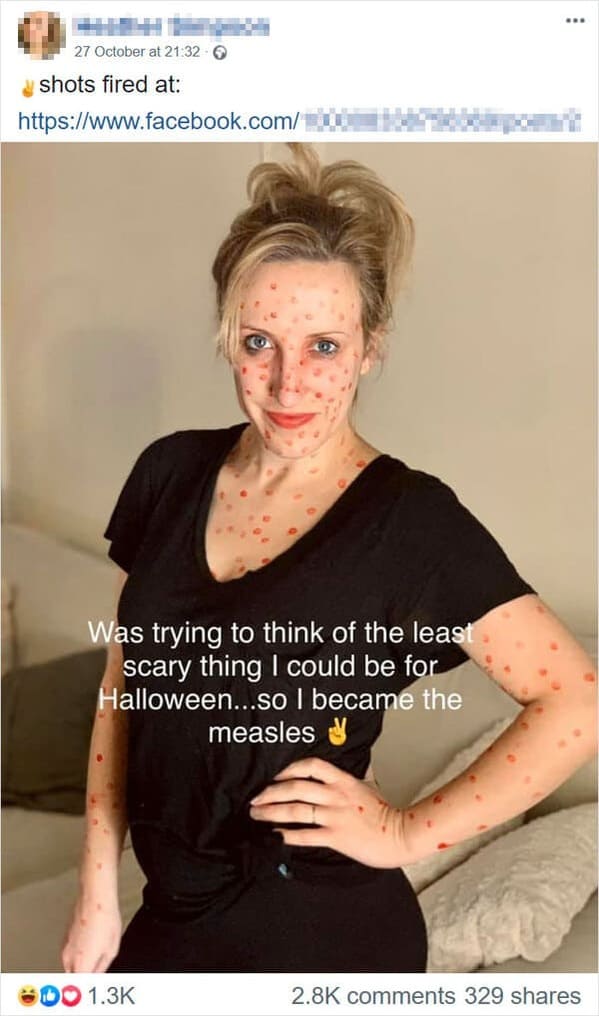 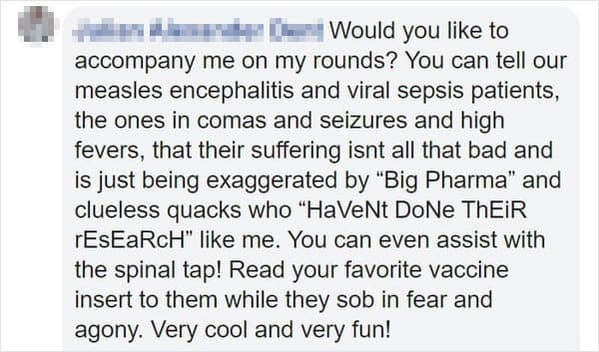 Damn. My doctor only gets mad at me when I admit I haven’t been watching what I eat. But I’ve never seen a response like that.

Don’t worry. She apologized by saying she’s completely right and refusing to back down.

She almost fixed it, but then said “nah, nevermind.”

5. Don’t threaten to kill your neighbor’s dog, even if the neighbor did change your Wi-Fi password.

One way to make sure you get on someone’s good side is to knock on their door and insist that they’ve done something illegal. This woman decided that she would threaten her neighbor for changing the Wi-Fi password. First, she says she’s going to call the cops over the landlord changing the password.

If that wasn’t enough, she assures the neighbor that she’s going to kill his dog. That’s simply a good understanding of how to make friends and influence people!

6. Another classic Karen: throwing a tantrum at Gelson’s Supermarket over their mask policy.

A woman (who, of course, also turned out to be anti-vaxx and a flat-earther) swears that COVID isn’t real. She should be allowed to go into a store without a mask and endanger everyone in there because she has a medical condition and also she doesn’t want some employee seeing her “private items” that she wants to purchase. You know, like… tomatoes. Blegh. Who eats those? The clip says it all.

7. Yet another grocery store Karen loses it, and starts putting her items back nicely. JK, she was a jerk about it.

A Karen, who is seen in the video holding a mask, loses it after a staff member tells her to put on a mask. They let her walk around the store without a mask on, but decided that getting close to the clerk bagging her groceries was dangerous. She was not having it.

Though there’s nothing necessarily funny about what occurred, Vic Berger took the time to make this video and made us all smile:

8. Another Male Karen becomes abusive to his server at IHOP.

A man took his son to IHOP to eat. There are only two types of patrons at IHOP: drunk people, and people whose kids forced them to go. Apparently, you can be belligerent with your server even if you’re sober. So was the case with this man. He freaked out when the waitress asked his son to put on a mask.

You definitely should not act this way in public or anywhere really. But if you’re going to have a meltdown, make sure you start with the asinine complaints about when appetizers should be served. Otherwise, you’re yelling like an angry Jerry Seinfeld. “What’s the deal with appetizers? They’re supposed to come before you eat. If I eat ’em… I’m not hungry.”

9. Speaking of masks in restaurants, leaving a 1-star review when you were the jerk is bold.

It’s important to remember that during the pandemic, most businesses are struggling. Making it worse for them is a no-no. This guy couldn’t be bothered to wear a mask the proper way, and outed himself online. 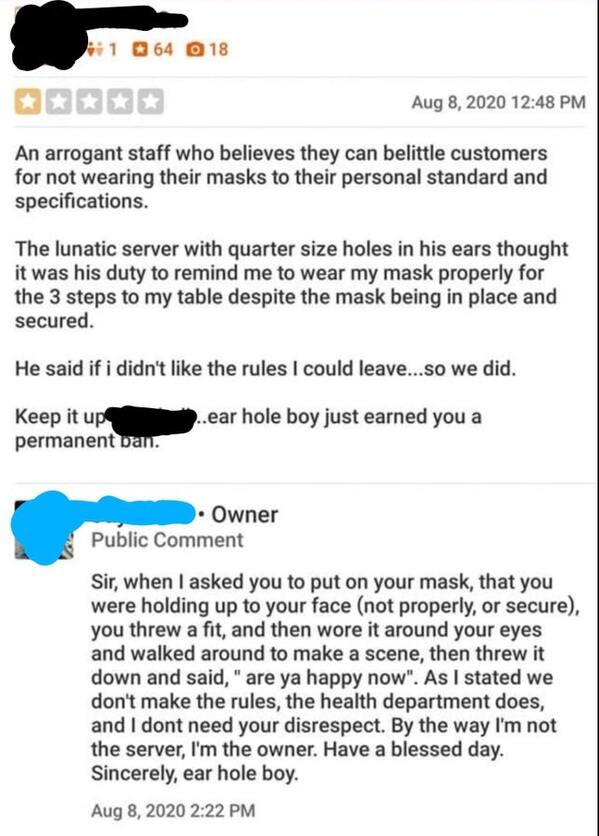 Commenters ate it up! 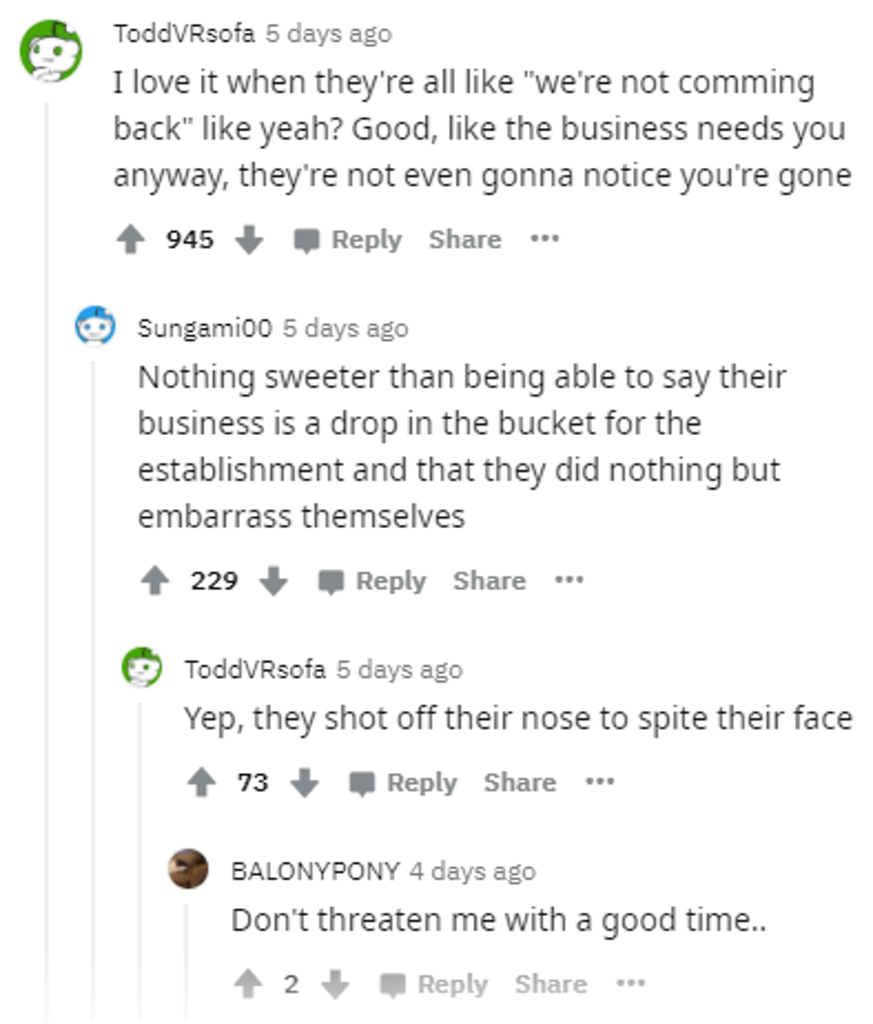 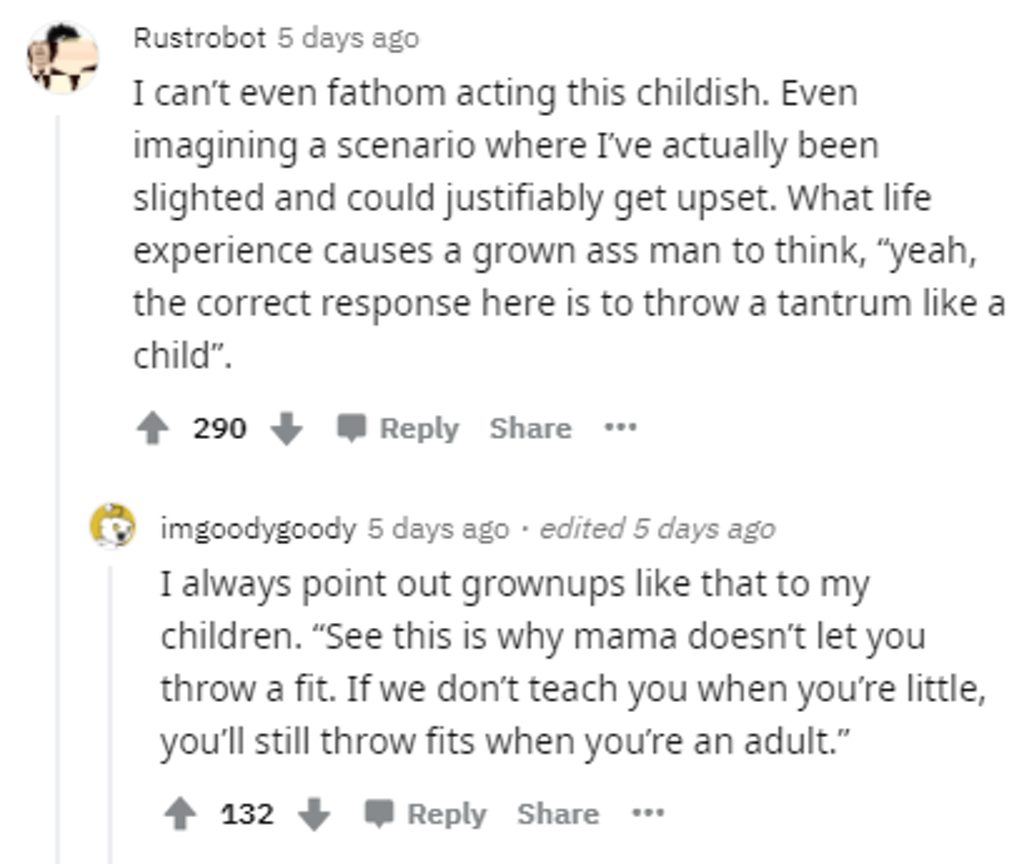 10. Target Store Karen is so Karen-y, people think the video was staged.

Target shoppers spotted a woman who decided to take a metal stand, clearly for holding baskets, around with her while she shopped.

Later, an employee had to do something. She was scratching up the floors!

Was it staged? You decide.